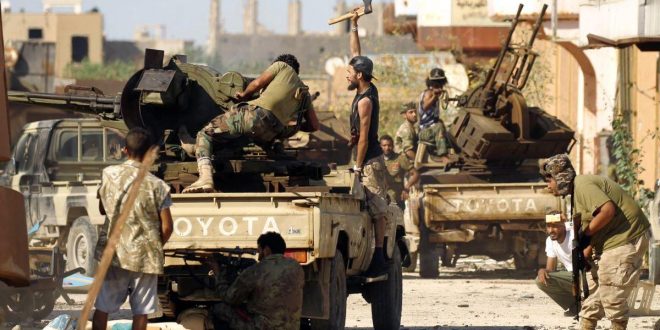 One group of Libyan militias has spilled the beans on how another group of militias was able to finance itself.

The coalition of Tripoli’s main militias, the Tripoli Protection Force (TPF), has revealed that it has discovered how its recent adversary, the Tarhuna-based 7th Infantry Kani Brigade, has been financing itself.

Whilst the TPF has billed this as a revelation, in all truth there is nothing new in this news to most Libyans. However, coming from another group of militias, the confirmation of facts on the ground seems even more validatory.

The TPF said that this is a preliminary list of the domestic sources of funding for the Tarhuna-based militias.

It said that it had lodged all this documented evidence with local police stations so that it could be used as official evidence and proof.

However, with regards to what the TPF said was “external finance “, it said that this file of evidence was lodged with the General Intelligence Service.

The TPF claimed that in view of it discovering the involvement of politicians, government officials and military personnel with major military ranks in this domestic financing of the Tarhuna-based militias, they called on the Serraj-led Presidency Council and Government of National Accord to assume their responsibilities in protecting the public and their properties from the Tarhuna-based “gangs”.

However, while the TPF coalition of Tripoli militias were only too keen to wash the dirty linen of the Tarhuna-based militias in public, many Libyans would have cried out something on the lines of pot calling the kettle black.

Whilst the Tarhuna-based militias may be accused of leaching off the various local businesses in the region they control, the Tripoli militias are accused of operating on a totally different scale.

Indeed, one of the grievances cited by the Tarhuna-based militias as a motivation for attacking Tripoli was the perception that the TPF had access to hard currency letters of credit from the Tripoli Central Bank of Libya (CBL).

There are accusations and the perception that some of the leading commanders of some of the Tripoli-based militias are in conspiracy with some bank managers, including at the CBL, to access hard currency at the preferential rate of LD 1.4 per dollar.

The current rate available for the general public is LD 4/dollar. At one stage in 2018 the black-market rate had reached LD 10/dollar.

There are also accusations and the perception that leading Tripoli militia commanders have accumulated fortunes in the millons in bank accounts and property abroad.

It is, therefore, suspected that Libya’s Attorney General’s Office is also sitting on a file of evidence of financial irregularities by many of Tripoli’s main militia commanders.

It will be recalled that the TPF had asked in its January statement:

Who is benefiting from the Tarhuna militia attacks and assaults?  Where are they receiving weapons and (financial) support from?

What is the identity and ideology of the fighters in their ranks? And who are the political and military personalities from Libya and beyond that stand behind them?

They speciically referred to the decison by Faiez Serraj in his capacity as the Supreme Commander of the (Tripoli-based) Libyan Army of 2 April 2018 (No. 79/2018) to dissolve the Tarhuna-based 7th Infantry Kani Brigade.

This dissolution would in theory have cut off the state salaries to the 7th Infantry Kani Brigade. This would pose the question of how the 7th Brigade had survived without pay or that their state salaries were not cut off.

It is clear that the TPF are working hard on their public relations, attempting to justify their continued existence in the face of public pressure to create a unified, politically accountable, regular police and army.

Their abandoning their individual original militia names and re-branding themselves as the TPF is a case in point.

They hoped to invoke the loyalty of the residents of Tripoli by re-branding themselves as the Tripoli Protection Force – especially in the face of an outside threat.

However, the TPF must take care and not overplay this hand as there is a very large Tripoli contingent of Tarhuna residents in Tripoli that they could alienate.

The TPF are also attempting to push back against the reactivated “Security Arrangement” which were relaunched by UNSMIL, the international community and the Serraj administration after the first attack on south Tripoli by the Tarhuna militias last August.

Bashagha cannot be seen as a pushover by Tripoli’s militias in view of the perceived backing he would receive from Misrata’s considerable militias.