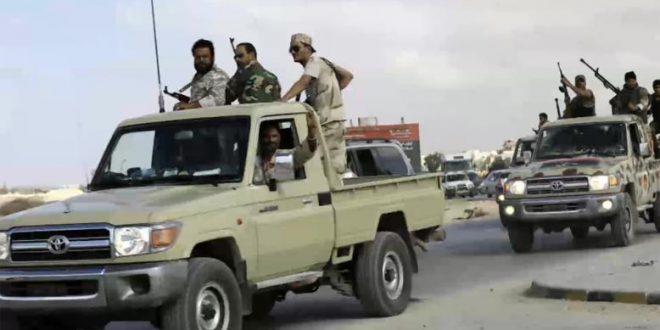 A paramilitary sweep into southern Libya, which rogue general Khalifa Haftar says is aimed at rooting out “terrorists” and foreign fighters, has sparked a backlash from an ethnic minority as well as the UN-backed government.

The offensive risks fuelling tensions in a country already wracked by violence and torn between rival administrations since the overthrow and killing of dictator Muammar Gaddafi in 2011.

A power struggle between the UN-backed government in Tripoli and a parallel cabinet supported by Haftar’s self-styled Libyan National Army (LNA) in the east has left the country’s vast desert south a lawless no-man’s land.

The rugged territory, which shares borders with Algeria, Niger, Chad and Sudan, has become a haven for militants and armed groups of all stripes.

They include Chadian rebels accused of fuelling insecurity and taking advantage of the country’s porous borders to establish rear bases.

The LNA in mid-January announced the start of an offensive intended to “purge the south of terrorists and criminal groups”, including rebels from Chad.

Days later, Haftar’s forces claimed they had killed an al-Qaeda leader and two other “terrorists”, including an Egyptian, before attacking the rebels.

The region is also the scene of a struggle between Libya’s minority Tubu community and Arab tribes, particularly over the control of cross-border smuggling routes.

Dozens were killed in clashes between the two sides until a 2017 peace accord signed in Rome froze hostilities. But some fear Haftar’s offensive could re-ignite the conflict.

Libya’s Tubu, part of a larger cross-border ethnic group, have long rallied against discrimination in the predominantly Arab country.

Some of its members accuse the LNA, which counts Tubu fighters among its ranks, of directing rival Arab tribes to enter their communities.

On Friday, Haftar’s forces said they had battled Chadian rebels in the town of Ghudduwah south of Sebha (650 kilometres south of Tripoli) before calling in airstrikes against the insurgents on Sunday.

But Tubu say they too were targeted.

The weekend strikes prompted one Tubu minister in the eastern administration to resign and another Tubu lawmaker in the same body to suspend her role.

Both spoke out against the “ethnic cleansing” of their community.

“Our Tubu brothers fight with us,” he said, hailing the “heroism” of the LNA, which was “clearing the south of terrorism, chaos and foreign elements”.

“One party refuses the presence of Chadian rebels and supports the LNA, while others support the (rebels) and profit with them from smuggling and human trafficking.”

Analysts say the LNA’s push may also be linked to oil interests in the south, where the Tubu control important resources.

The LNA said late on Wednesday it had seized one of the country’s biggest oil fields without a fight. Armed groups had shut down the al-Sharara field, around 900 kilometres (560 miles) south of the capital, in protest at perceived marginalisation by Tripoli.

Breaking three weeks of silence on the operation, the Tripoli-based government on Wednesday denounced the “military escalation” in the south.

The region “should not become grounds for political settlement or sedition between social and cultural components”, it said in a statement.

In a surprise move on Wednesday, Tripoli announced the appointment of Gaddafi-era general Ali Kana as its own commander for the south.

Kana, who supported the late leader until his death, fled Libya in 2011 before returning in 2015 to his native south, where he maintains the support of several major groups, including the Tuareg minority and the Gaddafi clan.

Tubu representatives have in recent days raised the possibility of forging a common front with Kana against the LNA.

That could thwart the ambitions of the LNA, whose offensive has garnered some degree of foreign backing, notably from France.

On Sunday, Paris said its planes had bombed a column of 40 rebel pickup trucks after they crossed into northern Chad from Libya – insurgents the LNA claimed were fleeing its offensive.

A rebel group opposed to Chad’s President Idriss Deby said it had been the target of the strikes.

France’s foreign ministry said on Tuesday that Haftar’s operation had “eliminated terrorist targets” and was a way to “durably hinder the activities of human traffickers”.