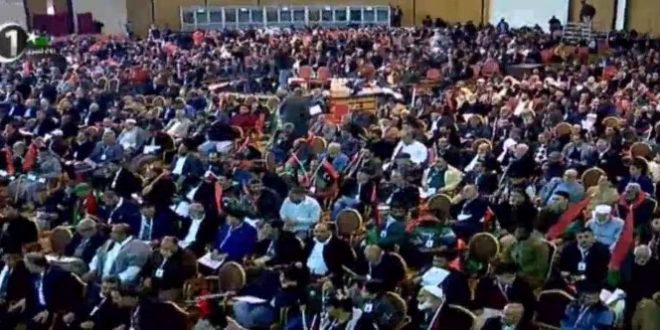 Under the banner of “Together to Build a Civil Sate” the gathered militia commanders launched the Libyan National Assembly party.

The gathering had initially been billed as the launchpad for the establishment of a new coalition of the Western Region Protection Force comprising militias from Tripoli, Misrata, Zintan, Zawia and Gharian as an alliance against what they call “counter-revolutionary forces”.

The Western Region Protection Force was first mentioned by the Tripoli Protection Force (TPF) on 8 February. It said that it will be integrating itself into a new larger coalition under one unified command.

The short statement had given no other details on this proposed force.

The rationale of the western region militias for creating this new force is that “bigger is stronger” in the face of a larger and stronger force/militia/army that poses a threat from outside of the region.

This is along the same rationale used to create the TPF by the Tripoli militias in the first place.

It will be recalled that on 18 December 2018 Tripoli’s four main militias announced their amalgamation into the TPF.

The militias are: The Tripoli Revolutionaries’ Brigade (TRB); Abusleem Deterence and Rapid Intervention Force; the Nawasi 8th Force; and the Bab Tajura brigade.

At yesterday’s Rixos meeting the focus was on the formation of a political party rather than the unification of the western militias. It is not clear if the militia unification has been dropped or postponed.

It is not clear if this is a serious move by these militias to form a genuine political party or this is simply a fig leaf for the Lebanonization of Libya through the enshrining of militia rule under the cover of a political party.

Sources that attended the meeting reported that the content of what the gathering had to say was very shallow and disappointing.

The meeting was more of a gathering of militia commanders of a particular political outlook than a meeting announcing an alternative and comprehensive political programme.

Attendees said the speakers were full of often-repeated old slogans glorifying the 17 February revolution and the revolutionaries that only contributed more to the current political polarization and division rather than to political unification and accord.

The gathered militia commanders were more united in their opposition to Khalifa Hafter, his anti-terror/Islamist Benghazi war, his war in Derna and his military operation in the south of Libya, than with a positive, alternative political programme.

The militias real desires can be summarized by their call for a civilian state in one sentence only then to announce that their party will officially have a military wing.

The meeting also called for the activation of the so-called National Guard, the defunct attempt to create an army by the Islamist/Libya Dawn movement in 2015-2016.

They desire this to be a regular force that would fall under militia command control to help preserve a civilian Libyan state and maintain security and order.

It will be recalled that Libya’s militias have been very unsuccessful since 2011 in creating political parties that represent their own visions and desires.

They had failed even as youth movements to achieve any electoral success in both the 2012 or 2014 parliamentary elections.

Equally, the gathering had militia representatives from, among other areas, Gharian, Zawia, Misrata and Tripoli. In reality, since 2011, these militias more often than not see themselves in competition for political and diplomatic positions, slices of Libya’s rentier state cake and power in general.

They have seen themselves as tribal and city/regional representatives rather than a broader political movement. It will be interesting to see if they can operate as a political democratic entity rather than tribal/regional military units.