Home / Normal / Salame’s plan in its four processes.. Will it succeed? 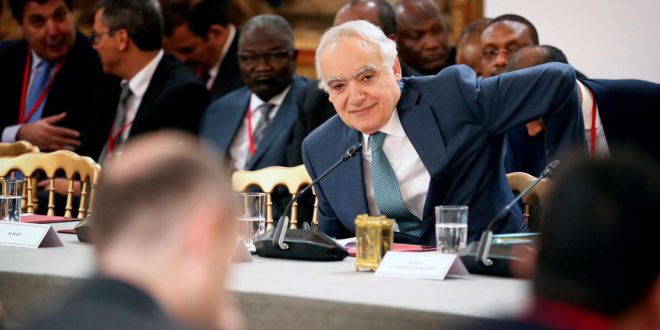 Salame’s plan in its four processes.. Will it succeed?

What are the prospects for the Libyan political landscape in the new year of 2019?

Will Libya remain divided in two governments, and prevail the governance of military factions and civil clashes? Will they continue to have a systematic plundering of resources and economy of the country, or will they make a quantum leap forwards because of the UN reconciliation programme of 2017?

The UN reconciliation programme started with Ghassan Salame, who serves as the UN Secretary General’s special representative and Head of UN support mission in Libya, who fathoms Libya’s complex political crisis. Salame sees the main reason that prevents the crisis settlement is Libyan people are frustrated and have lost hope of what is currently happening in Libya’s political scene.

In his first statement once he took the office, Salame said:

Libyan people have given up the transitional period, in which people haven’t had what they want, like the good governance, high living standards…etc.

There are some challenges that face the transitional process – one of which is the United Nations Support Mission in Libya (UNSMIL). Few competent political individuals, for most of them don’t have a clear vision to fight for, thus, most of the 2012 and 2014 Parliament members don’t want to leave their seats.

Salame explained that Libya’s political division’s aim is at sharing the country’s resources and turning the economic to a looting-based economy.

Libyan people want to isolate the corrupt individuals and institutions through a comprehensive process and elections that pave the way to good governance, and provide sustained livelihoods for Libyan people.

However, we could state four processes to Salame’s sound plan to help in understanding its whole dimensions;

First, settling the key disputes between the conflicting parties – this could be through elections only, for it could not be solved friendly.

Second, well prepared for elections. A great amount of work has been done regarding the issue, the Libyan High Election Commission has started to update the voter lists, one million new voters have been enrolled, thus, the ratio of those who entitled to vote has raised from 31% to 53%, and the commission announced its readiness to conduct the referendum over the constitution.

Third, achieving the proposal of the new constitution draft of 2017, which was approved by Libya Supreme Court, which denied the appeal that had been filed in February 14 2018, as well as, the row over referendum of the constitution act.

Forth, carrying out limited institutional reforms, such as, settling the division over Central Bank of Libya, and Tripoli’s ministries and official troops have to take over the task of running the country, instead of the factions.

The second process is the brick for building a new political class, with a new vision which leads to conducting of the next Parliamentary elections.

However, Salame has received the final report that stated the areas of differences over the coming National Conference of Libya.

The report summarised the deliberating points as follows:

Fifth, setting a date for convention of the national conference, this could have the following outcomes:

There are concerns with development projects, which help in taking initiatives and using the International and UN support to fix Libya’s social and economic disorders.

The regional and International support constitutes another process – which aims at bringing active international role to prevent foreign interference in the domestic affairs of Libya.

Briefly, who does guarantee the positive response to all above mentioned prospects, amid a huge armed force, and absence of state’s sovereignty?

There should be international assurances to enforce the hard power to respect the triumphs of the soft power.