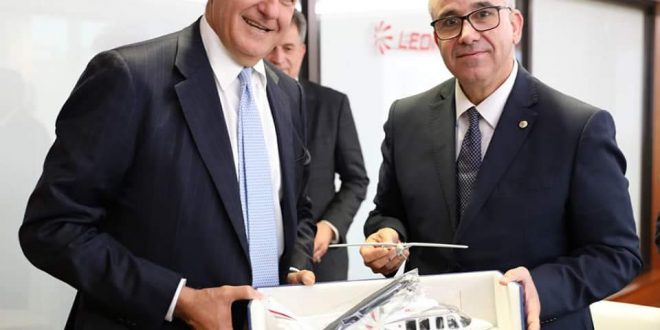 He was accompanied by the Director of the Libyan Foreign Investment Company.

La Costa is part of the Leonardo group of companies.

At the meeting, the MoI said several related topics that serve its interests were discussed, including the training aspect of the General Directorate of Police Aviation and the activation of previously concluded contracts between Libya and the Italian company.

The maintenance of aircraft belonging to the General Department of Police Aviation of the MoI, which serves the security aspect of the fight against illegal immigration, smuggling, border control and organized crime, was also discussed.

The Libyan embassy in Rome, however, was more explicit, posting that the Libyan side had asked for the return of Italian technicians to the LIATEC joint helicopter project in Libya.

It will be recalled that in 2009, Finmeccanica finalised a €300 million deal with the Libyan state to provide a border control and security system to stop migrants crossing the border into Libya before heading to Italy.

The deal included radars and other surveillance systems, a command, control & communications system and the training of staff.

Between 2006 and 2010 the General Security of Libya bought over 20 AgustaWestland helicopters for a range of functions, including Search and Rescue and border patrol.

The plant was aimed at improving and developing Libya’s aviation and electronic systems capabilities in the country and features final assembly lines for helicopters. As the Libyan 2011 revolution broke a number of helicopters were in the process of veing manufactured.

By 2011, the Libyan Investment Authority was Finmeccanica’s fourth largest shareholder, with a substantial 2% stake.

It will be recalled that in theory there is a UN arms sale ban to Libya – but there is much evidence that this ban is being flaunted by both sides in Libya’s political divide.