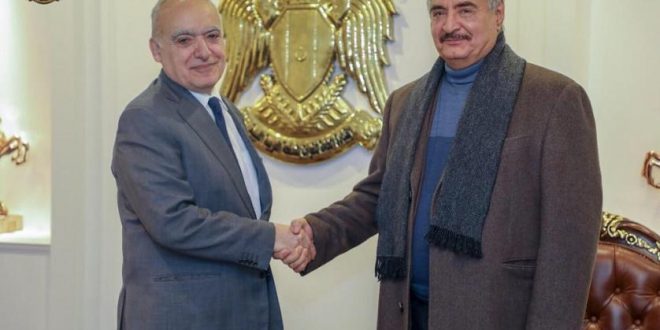 He made these remarks in a telephone call with United Nations envoy to Libya Ghassan Salame, saying the LNA was prepared to ensure the transparency and success of the presidential and parliamentary elections.

The two officials also discussed the transition period in the country in wake of the meeting held between Haftar and Government of National Accord chief Fayez al-Sarraj in Abu Dhabi last month.

Haftar invited Salame to hold further talks with him on Wednesday at his headquarters in al-Rajma on the outskirts of Benghazi in eastern Libya.

Separately, Sarraj made a surprise visit to Qatar on Sunday, said a statement from his office.

He held talks with Emir Sheikh Tamim bin Hamad Al Thani in what was described as a short work visit.

Sarraj stressed during his trip the importance of the political solution and national consensus in Libya, as well as holding elections and unifying sovereign institutions.

Meanwhile, the UN mission in Libya announced that Salame and Italian Prime Minister Giuseppe Conte had held a “long” telephone call on the situation in the country.

Conte voiced “full support for the UN’s action for the stabilization of the country” and called on “all parties to take responsibility for the expectations of the Libyan people.”