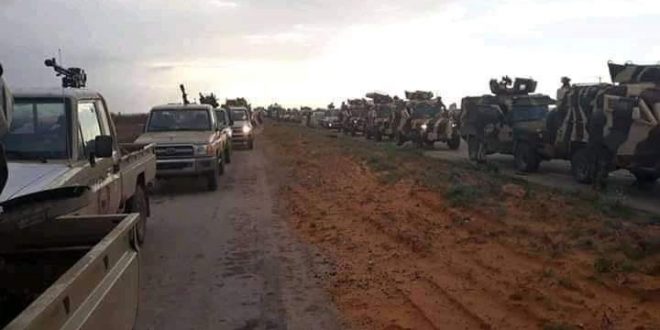 The world’s most complicated ongoing civil war erupted in Libya in mid-2014.

Forces aligned with the internationally recognised, albeit extremely weak government in Tripoli – the Government of National Accord (GNA) – are fighting those loyal to the secular-leaning House of Representatives (HoR) in Tobruk.

Beyond this main power divide between Tripoli and Tobruk has been the injection of extremist forces such as Islamic State into the civil war and complicated tribal dynamics in play in Libya’s often lawless southern Fezzan region.

From the perspective of European states, as well as Libya’s neighbours, the continuation of the crisis poses countless security challenges.

Despite the motivation that many domestic and foreign actors in the Libyan civil war have to peacefully resolve the conflict, the crisis rages on. After all, some outside states, in pursuit of their geopolitical and ideological interests, have hindered the prospects for national reconciliation in Libya.

For the international community to responsibly help Libyans move toward lasting peace and stability, it is imperative to address the regional states that sponsor their respective clients in the war-torn Maghrebi country.

The nature of Muammar Gadaffi’s 42-year rule over Libya helps explain many of the problems that Libyans still struggle to overcome, eight years after he was ousted.

The revolution of 2011 toppled the country’s sole decision-maker, whose institutions had shaped Libya for decades and determined how the oil wealth was allocated and redistributed. The slain dictator left behind a country devoid of any civil society or any system that protected individual political rights and civil liberties.

After Gadaffi’s fall, Libya was awash in weaponry and countless groups filled with vengeance and a determination to settle old scores.

Amid the chaotic unrest that followed the revolution, no democratic transition took place. To the contrary, after the destruction of the Gadaffi regime’s apparatus, the new security architecture that took shape was deeply fractured and decentralised.

The country’s ethnic, linguistic, ideological, geographic, and tribal divisions came to the fore without any strong Libyan national identity to bring the country’s citizens together. Such dynamics have heavily shaped the country’s landscape, hampering the emergence of any effective national institutions since the 2011 revolution.

With Libya remaining deeply divided after Gadaffi’s fall, the western states (United States, UK, and France) that played a major role in the regime’s destruction grew frustrated with the lack of democratic progress and have turned their attentions away from the country.

Regional states in turn became increasingly involved. Libya’s neighbours, as well as Turkey, and some Gulf states have been determined to strengthen their respective clients’ positions in Libya via geographic and ideological links.

The Libyan conflict and the ways in which regional states have involved themselves in the civil war reflect a deep divide in the greater Sunni Muslim world.

On one side, an anti-Muslim Brotherhood bloc of states – Egypt, Saudi Arabia, and the UAE – have backed the Libyan National Army (LNA), led by General Khalifa Haftar, which is loyal to the HoR.

On the other, Qatar, Turkey, and Sudan have supported various Islamist factions in Libya, including the Muslim Brotherhood-linked militias from Misrata. The rivalry between these two blocs within the Sunni Muslim world contributed to the Libyan civil war’s eruption in 2014 and the country’s subsequent bifurcation.

The fight for the Fezzan

In January 2019, under the pretext of fighting terrorism, LNA forces waged a large-scale attack in the Fezzan to seize control of the local oil production.

The LNA is working to expand the territory under Haftar’s command to further weaken the Tripoli-based government’s authority in the country.

The LNA’s operations in the Fezzan at the beginning of 2019 sent a message to Tripoli about the strength of Haftar’s forces and their determination to consolidate Tobruk’s political and military leverage, especially in Libya’s oil-rich areas of contest. such as the El Sharara oil installation, which the LNA seized on 9 February.

As a result of Haftar’s offensive into the Fezzan, his forces currently control two-thirds of Libya and almost all of the country’s onshore oil fields.

The GNA condemned the actions taken by Haftar’s forces in southern Libya as acts of terrorism and called on the UN to issue a similar condemnation.

This battle for control for the Fezzan is affecting the complicated relations among various ethnic/tribal groups in southern Libya.

The indigenous Tebu and Tuareg tribes, which started fighting each other in 2014, have overcome past grievances to unite against Haftar. The Tebu’s alliance with the Tobruk-based government fell apart in 2016 due to the HoR’s alleged favoritism of Arabs over non-Arabs (including the Tebu).

Haftar’s alliance with the Awlad Suliman tribe (an Arab foe of the Tebu) further informed the Tebu tribal leaders’ perception of Haftar as a threat worth countering in cooperation with the Tuareg.

As the LNA seeks to further consolidate its control of the Fezzan, the anti-Haftar front of the Tebu and the Tuareg will be tested. If the Tebu-Tuareg force can emerge as a formidable military power in the Fezzan, it will heavily influence Libya’s future security architecture in the Fezzan.

A badly needed strategy for peace

The UN has attempted to push Libyans toward compromises that build institutions that represent the country’s different communities. For the Ghassan Salame-led UN process to succeed, international and regional states sponsoring different players in the Libyan civil war must communicate to their clients that boycotting such a process is not an option.

This will not be an easy lift. The civil war can only be resolved if the different actors agree on a security architecture, a form of government, economic reforms, geographic locations for major national institutions, and more.

Legitimising such reforms and institutions via popular referendums would require the various actors in Libya to accept the outcomes regardless of the results.

Such an outcome is only remotely possible if the foreign players cut back on their support for rejectionist forces in Libya. In practice this will require UN-authorised measures to stop illegal oil exports.

Last year, the Wall Street Journal exposed how the UAE and Haftar entered secret talks to facilitate Libyan oil exports beyond the UN-endorsed channels. Failure to enforce the UN process will subject Libya to graver threats of secession and intensification of violence waged over natural resource control.

Late last month, the head of the GNA, Fayez Serraj, met Haftar in Abu Dhabi for talks on resolving the Libyan civil war.

The invitation came from Mohammed bin Zayed, the UAE’s de facto ruler. Serraj and Haftar agreed to hold elections that end Libya’s transitional phase and built strong and unified national institutions that can ensure peace and security in the country.

The two have met before, most recently in Palermo (November 2018) and earlier in Abu Dhabi (May 2017). That no breakthrough was reached last month in the Emirati capital illustrates how deep the current impasse is.

The compromises that Libyans must make for a legitimate government to come to power will be painful, especially given the greed, grievances, and hostility pitting different Libyan factions against each other. Officials in Abu Dhabi, Ankara, Cairo, Doha, Khartoum and Riyadh can certainly help push the Libyans past this manner of thinking by cutting off support for uncompromising elements.

Unfortunately, Haftar’s Arab state backers may do the opposite by encouraging him further in the aftermath of the LNA’s recent gains in the Fezzan.

Indeed, Haftar may be planning an LNA-led offensive to capture Tripoli. He may feel more emboldened by the Palermo conference in November 2018 where Italy and France’s leaders addressed him as Libya’s de facto head of state.

Those who favour placing a unified military command under civilian control suspect that Haftar will always oppose the civilianization of Libya’s political, military, and security institutions in favour of pursuing dictatorial powers for himself.

It’s unrealistic to expect Libya’s various actors to restrain their own ambitions. For the country to emerge from civil war, regional actors are going to have play that restraining role.