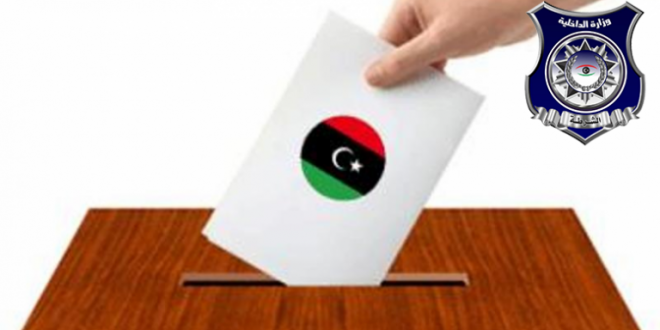 The Ministry of Interior (MoI) aligned with the Faiez Serraj-led Presidency Council and Government of National Accord announced last Sunday that it has recently established an Elections Security and Protection Department, part of its General Directorate of Operations.

This new department will take over the tasks of preparing plans for and securing the entire electoral process. This will include securing polling stations, ensuring the secure transfer of funds and equipment used in the elections, the direct supervision of the operating rooms in the main and sub-districts of the main constituencies and to provide all the needs and equipment for these rooms – all in coordination with other relevant entities including the High National Election Commission (HNEC).

The Ministry of Interior assured all that it is fully prepared to carry out its duties to secure any electoral process nationwide, and that it will withstand all those who deem to undermine the security of Libya and its citizens.

It is not clear from its statement if the Tripoli-based MoI has indeed secured the cooperation of the parallel MoI in eastern Libya. There had been reports last year of representatives of the MoI from the east and west meeting in an attempt to unify and coordinate their activities at least on a pragmatic level, if not politically.

It will be very difficult to carryout any sort of meaningful nationwide elections in Libya when territorially, at the time of writing, the eastern forces seem to be in nominal control of most of Libya geographically. Some sort of consensus and cooperation would be a prerequisite to any elections.

It will be recalled that elections were meant to be held at the end of last year, as was agreed last May at the Paris Libya conference, which were postponed to early this year. Now elections are planned by the end of the year.

Prior to these elections, UNSMIL was supposed to hold a National Conference (Multaqa) to establish some kind of consensus prior to elections. This was also supposed to have been held in the first weeks of 2019. This would then have been followed quickly by a referendum on the draft permanent constitution in order to provide a constitutional basis for any elections. This has also been postponed with no new date announced.