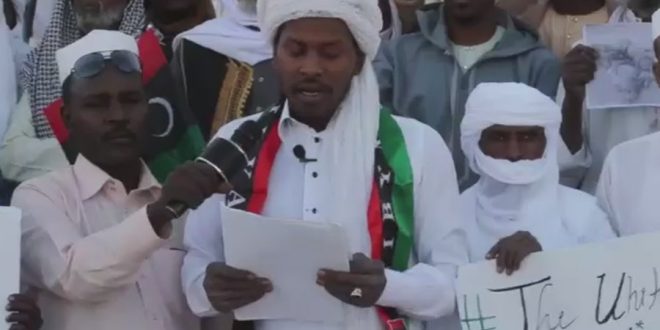 Tabu tribe calls for an international investigation into violations against them

Components of the Tabu tribe demanded in a statement the release of their abducted sons immediately and unconditionally, calling on the Security Council and the international community to intervene urgently, to protect civilians and form an international commission, in order to investigate violations in the city of Murzuk, in accordance with international legislation and charters.

The tribe called on all organizations and Red Crescent and Red Cross teams to help in the search of the missing, and the recovery of bodies from the mass graves found in the outskirts of Murzuk.

The statement also emphasized the need for building a civil state, which can be a sound base for peaceful coexistence, through a consensus constitution that guarantees partnership and equality in institutions.

The Tabu tribe denounced in the strongest terms, the grave violations committed against them, saying it’s aimed at trying to break them with the force of arms, they also referred to the siege and the assassinations against unarmed civilians, and the committing of mass massacres.

“The so-called Dignity Operation leadership incur the full liability for these violations and the Presidential Council (PC) and its government hold the national, moral, and social responsibility for not taking any action and failing to fulfil their duties” the statement read.

In the same context, the Tabu tribe condemned the House of Representatives (HoR), the High Council of State (HCS), and the political actors for their silence and poor performance towards ending the hostilities and violations against them.

“The crimes perpetrated in Murzuk include the killing of unarmed civilians, besides hundreds who were wounded, not to mention the mass graves found in several parts of the city containing bodies with their hands bound,” the statement added.

They also referred to other violations, including the kidnapping of dozens of young people on identity, as well as looting of property, where more than 300 cars have been reported stolen from the citizens, in addition to the burning of more than 94 houses.

The Tabu stressed that the systematic violations against them fall under the targeting of Tabu on identity, who have suffered and are still suffering the consequences of attacks after the revolution of the 17th of February, from 2012 to now.