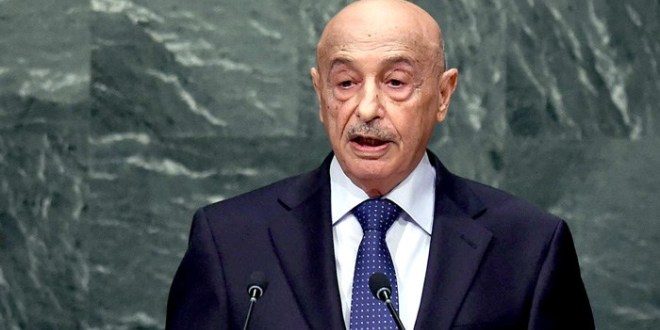 The speaker of Libya’s eastern parliament said on Wednesday no peace deal can be reached between rival factions in his country because the capital, Tripoli, has been “kidnapped” by armed groups.

Aguila Saleh, speaker of the Tobruk-based House of Representatives, told The Associated Press in the Egyptian city of Alexandria that the self-styled Libyan National Army has stepped in to “liberate” Tripoli.

“The capital has been kidnapped…. the military (LNA) has stepped in with only one goal, which is to root such groups out of the capital,” Saleh said.

He said it would be impossible to hold next week’s UN-planned peace conference, given the current conditions. The conference was postponed by the UN on Tuesday.

LNA forces, led by Khalifa Haftar, are loyal to the rival government in the east. Haftar’s forces launched a major military offensive earlier this month aimed at capturing Tripoli, clashing with rival militias that support the internationally recognised government there.

The escalation has threatened to plunge the fractured North African nation deeper into chaos and ignite civil war on the scale of the 2011 uprising that toppled and killed longtime dictator Muammar Gaddafi.

A UN-supported national conference set for mid-April was planned to forge a political roadmap that would restore order in Libya, where lawlessness has fed militancy, human trafficking and instability in the wider region. Moving toward parliamentary and presidential elections was a key goal of conference.

Libya slid into chaos after the NATO-backed uprising that toppled and later killed longtime dictator Muammar Gaddafi in 2011.

Elections were held shortly after Gaddafi’s demise, but failed to bring stability. In the years since, Libya has been split between rival governments in the east and west and has emerged as a major conduit for African migrants hoping to reach Europe.

The International Organization for Migration (IOM) said, meanwhile, that the escalation in violence in and around Tripoli has resulted in the displacement of more than 5,800 people who have fled their homes.