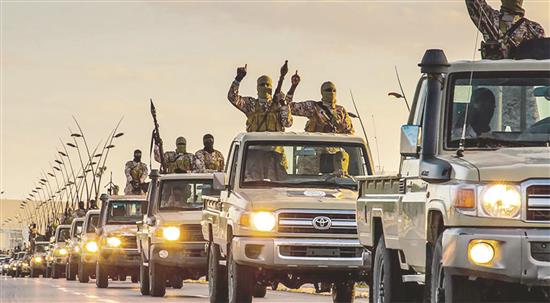 Fighters affiliated with Libya’s Government of National Accord said they have arrested scores of forces loyal to General Khalifa Haftar in the city of Zwara, west of capital Tripoli.

The fighters – who arranged a tour around the prison for journalists – said that they had arrested scores of troops loyal to Haftar, Arabi 21 reported yesterday. The fighters added that one of Haftar’s warplanes bombed a camp in the city of Zwara, wounding one civilian.

The ongoing battles around Tripoli have resulted in the death of 75 people and wounded 323 others, according to the World Health Organisation (WHO).

The commander of one of the fighters’ groups said that there are “hit and run” battles in the areas around Tripoli Airport, which was deserted after it was targeted by Haftar’s forces.

The WHO said it has handed over enough medical supplies to hospitals in the area for two weeks “during this dangerous stage”. The organisation also said that 6,000 people have fled these areas so far, noting that it has emergency plans to deal with the ongoing situation.