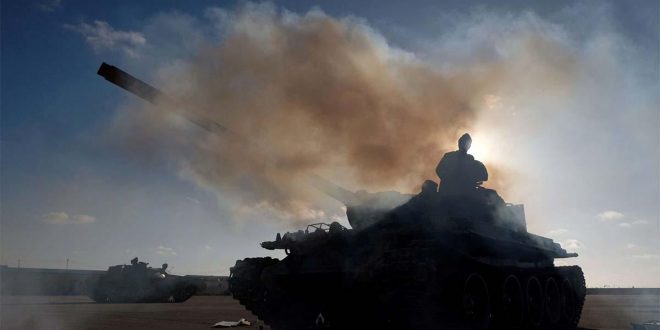 At least four people were killed in heavy shelling in the Libyan capital an official said on Wednesday, as world powers called for an immediate ceasefire in Tripoli.

The shelling struck the southern district of Abu Salim late on Tuesday, triggering large explosions in the city.

Artillery killed at least two civilians, emergency services said, although another official told Libya’s Alahrar channel that four had been killed and 20 others wounded.

The shelling triggered an impromptu demonstration in the capital, where hundreds flocked to Martyr Square to protest the flare up in violence, according to images on social media.

The LNA issued a statement condemning what it described as “terrorist” indiscriminate shelling in Tripoli‘s outskirts.

At least 174 people have been killed and 758 injured, including civilians, since Haftar’s self-styled Libyan National Army (LNA) launched its offensive on April 4, according to figures from the World Health Organisation.

The United Nations Office for the Coordination of Humanitarian Affairs (OCHA) calculates that more than 18,000 people have been displaced as a result of the clashes.

Earlier this week, Britain presented a draft resolution to the UN Security Council demanding an immediate ceasefire in Libya after forces loyal to warlord Khalifa Haftar launched an offensive on Tripoli, according to the text obtained by AFP on Tuesday.

The proposed measure said the offensive by Haftar’s Libyan National Army (LNA) “threatens the stability of Libya and prospects for a United Nations-facilitated political dialogue and a comprehensive political solution to the crisis”.

The council “demands that all parties in Libya immediately de-escalate the situation, commit to a ceasefire, and engage with the United Nations to ensure a full and comprehensive cessation of hostilities throughout Libya,” the draft says.

Britain hopes to bring the measure to a vote at the council before Friday, but diplomats said it remained unclear whether negotiations on the measure would wrap up that quickly.

Resolutions adopted by the council are legally binding.

Meanwhile, Qatar Foreign Minister Sheikh Mohammed bin Abdulrahman al-Thani called for a boycott of the militia leader on Tuesday and demanded the rogue general end his assault on the capital.

“By rendering effective the embargo against Haftar and preventing those countries that have supplied him with munitions and state-of-the-art weapons from continuing to do so,” he responded.

He also blamed Haftar squarely for the recent surge in violence in Libya.

“The actions of the militias led by Haftar in Libya are foremost in hindering international efforts to achieve a Libyan national dialogue,” he tweeted, according to Reuters.

“We want an immediate cease-fire and we hope for the withdrawal of the (Haftar) forces,” Conte said, according to Famagusta Gazette.

“We believe that dialogue is the only plausible and sustainable way forward…and we are working towards an inclusive solution under the aegs of the UN.”

“It would be reductive and simplistic to paint a picture of the Libyan situation that only includes Haftar and Sarraj,” Conte said.

“There are foreign global players that are weighing strongly in this situation.”

The global powers Conte was referring to include a myriad of countries who have given material or political support to Haftar, who now controls eastern Libya, and other parts of the west following recent offensives.

The UAE and Saudi Arabia are said to have been bankrolling Haftar’s offensive on Tripoli, which was launched on 4 April.

Russia has also reportedly sent mercenaries to help the militia leader and Egypt backing him with air strikes, while France has been accused of supporting Haftar diplomatically.

Qatar and Turkey – arch-regional rivals of the UAE and Saudi Arabia – have been accused of providing lesser support to the UN-backed GNA in Libya.