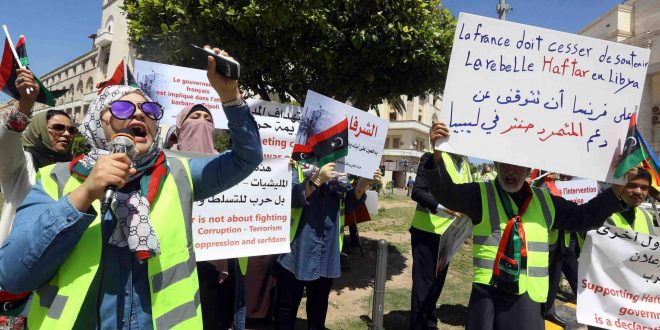 Libya’s UN-backed Government of National Accord (GNA) appealed Tuesday for Europe’s support against military strongman Khalifa Haftar, as the country’s former colonial ruler Italy and France spar over a conflict that has stirred divisions both regionally and internationally.

Haftar, who leads the self-styled Libyan National Army (LNA), has pushed out from his power base in the country’s east towards the Libyan capital in the west, the seat of the UN-backed unity government led by Fayez al-Sarraj.

The conflict in Tripoli has brought a growing humanitarian toll – 174 people, 756 injured and 18,250 displaced according to latest United Nations tallies – and sunk for now an international peace plan.

It threatens to disrupt oil flows, foment migration across the Mediterranean Sea to Europe, and allow jihadists to exploit the chaos.

Foreign powers are worried but unable to present a united front over the latest flare-up in the cycle of anarchy and warfare that has gripped Libya since dictator Muammar Gaddafi was toppled in 2011.

Paris has given Haftar support in the past, viewing him as the best bet to end the chaos since a NATO-backed rebellion to end Gaddafi’s murderous four-decade rule.

Italy, with considerable oil interests in the OPEC member, supports the Tripoli government of Prime Minister Fayez al-Sarraj and was furious with French reluctance to back a recent European Union resolution urging Haftar to halt his advance.

Nevertheless, Sarraj has managed to keep the LNA at bay, thanks largely to armed groups who have rushed to aid them from other western Libyan factions.

Though Haftar presents himself as a champion against what he calls terrorism, opponents cast him as a would-be dictator in the mould of Gaddafi. About 70 people protested against him at the central Algiers Square in Tripoli on Tuesday.

“We are against Haftar and military rule,” said demonstrator Assam Dirbiq.

Haftar was among officers who helped Gaddafi rise to power in 1969, but fell out with him during a war with Chad in the 1980s. He was taken prisoner by the Chadians, rescued by the CIA, and lived for about 20 years in Virginia before returning in 2011 to join other rebels in the uprising against Gaddafi.

‘Interests the whole of Europe’

Yet Tripoli’s roughly 2.5 million people were maintaining a semblance of normality – even as the occasional artillery boom echoed across the city.

“We are still carrying on, thank God. What else can we do?” said Mohamed Taha, 23, in a street where students still packed a nearby school. Cafes and shops also remained open and busy.

The GNA appealed Tuesday for EU support against Haftar’s offensive on Tripoli, warning continued violence could see 800,000 people try to flee to the West.

“It interests the whole of Europe to see a peaceful and democratic Libya,” GNA vice president Ahmad Maitig told the foreign media press association in Rome.

He said Italy’s Interior Minister Matteo Salvini “shows big support for the peace process” and brushed off reports France favoured Haftar, saying “the position of the French government is to support the national accord government”.

But he repeated warnings that the offensive by Haftar’s forces could spark an exodus of displaced Libyans and migrants.

Some “800,000 people can easily reach Europe,” he said, adding that Islamic State group fighters currently held as prisoners could be among them.

There were “more than 400 (IS) prisoners” in Libya whose whereabouts could not be secured should Haftar push on to take the capital, he said.

“This is something not understandable for the GNA,” he said.

Maitig also dismissed the idea the government would intervene to prevent Libyans and migrants fleeing for Europe under an EU-approved deal signed between Italy and Libya in 2017.

“There is no agreement on keeping the migrants in Libya at all. Zero. The agreement was to prepare the Libyan coastguard… that is it.”

The accord for Italy to train Libya’s coastguard — signed in a bid to end Europe’s biggest refugee crisis since the Second World War — saw a significant drop in the flow of African migrants across the central Mediterranean.

Some 265 migrants have landed in Italy so far this year, compared to 7,500 last year in the same period and over 30,000 the year before, according to the interior ministry.

The UN migration agency said on Tuesday that 6,900 migrants were still trapped in government detention centres in Tripoli despite efforts to move some to safer places.

The migrants, mainly from Africa and Syria, have been apprehended arriving through the Sahara with the intention of crossing the Mediterranean to Italy and elsewhere.

Some in one detention centre close to clashes have refused relocation, saying they want permanent solutions to their plight, International Organization for Migration spokesman Joel Millman said in Geneva on Tuesday.

Libya has long been a major transit country for migrants desperate to reach Europe via the Mediterranean.

International aid groups have warned migrants could be used as human shields or forcibly recruited to fight.

Haftar’s offensive began shortly before a conference set for this month to discuss Libya’s future — an event the UN cancelled as the forces closed in on the capital.

The UN Security Council is considering a British-drafted resolution that would demand a ceasefire and urge all nations with influence over the warring parties to ensure compliance.

The 15-member council has expressed concern but been unable so far to issue a more formal statement, diplomats said, as Russia objected to a reference to the LNA while Washington said it could not agree a text that did not mention Haftar’s forces.

The Western diplomatic divisions echo those among regional states, as Qatar called on Tuesday for a blocking of foreign arms supplies to Haftar’s forces.

Qatar said an existing UN arms embargo on Libya should be strictly enforced, to prevent Haftar, 75, from receiving arms.

The Benghazi-based Hafter enjoys the backing of Egypt, the United Arab Emirates and Saudi Arabia, who view him as an anchor to restore stability and combat Islamist militants. Those three nations cut ties with Qatar in 2017, accusing it of support for militants and Iran.

The arms embargo must be implemented “to prevent those countries that have been providing ammunitions and state-of-the-art weapons from continuing to do so,” he said.

Past UN reports say the UAE and Egypt have both supplied Haftar with arms and aircraft, giving him air superiority among Libya’s multiple factions. East Libyan authorities say Qatar and Turkey back rival, Islamist-leaning factions in western Libya.