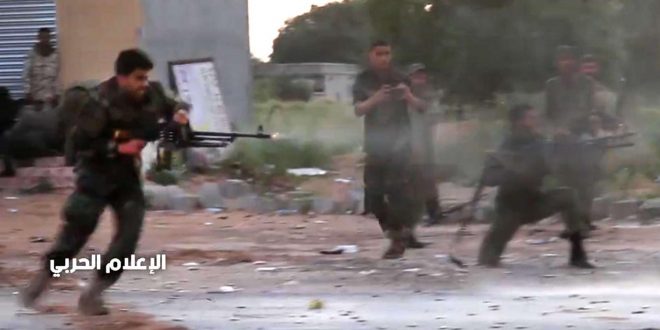 On Libya’s front lines, fighters often hold a gun in one hand and a smartphone in the other, using their cameras in the propaganda war.

Since strongman Khalifa Haftar launched an offensive to seize the capital Tripoli, most Libyans have watched the fighting on social media.

Facebook has become the main online battleground, where both sides weaponise photos and video footage — both real and fake.

Images of wounded, killed or imprisoned fighters are immediately published by one side or the other as they try to prove their supremacy on the battlefield.

When rockets slammed into residential areas in the south of the capital Wednesday, killing six people, both sides, predictably, blamed each other.

Last week, unity government spokesman Colonel Mohamad Gnounou even accused Haftar’s forces of “infiltrating certain places, taking pictures and then withdrawing” so they could claim online to be in control of a particular site or neighbourhood.

This week, an American who had become an unlikely celebrity in Libya took to the Internet to deny reports by Haftar’s LNA that he had piloted a Libyan fighter plane as a GNA “foreign mercenary pilot”.

In his own short video post on Twitter, he held up a US newspaper to date the clip and assured viewers that “I am currently here in the US … I am not in Libya”.

Warring factions have used fake content to discredit their enemies or hit their morale.

“It is true that we have a huge wave of misinformation spread through social networks,” said Libyan analyst Emad Badi.

“Each party has invested considerably to influence the media to adopt a narrative that is favourable to them”.

Last week, three videos circulated — all purportedly shot at the same time, in the same place on the front line, but with completely different messages.

In two of the films, one side claimed that its rivals had laid down their weapons and surrendered.

A third clip, whose authorship remains a mystery, showed the unlikely scene of fighters halting combat and embracing each other, crying “united Libya”.

One Internet user quipped that “whatever the real version of the facts, a united Libya triumphed for at least a few moments”.

Social media users have sought to fill the vacuum left by mass media, as each Libyan television station has long chosen its side and tends to broadcast videos or photos without verification if they appear to support their stance.

“There’s no point in turning on the TV,” said one young Libyan, Karim, his eyes fixed on his phone, as he sat on the terrace of a seaside cafe in Tripoli.

“Libyan channels are either late or so biased that it’s comical if you’re not on the same side.”

Some internet users have taken on the role of military experts, pointing to maps and images of specific weapons to support their take on the truth.

Not surprisingly for a country riven by multiple conflicts since the fall of late dictator Moamer Kadhafi in 2011, Libya also has armies of online trolls who spread hatred and incite violence.

“Anonymity on social networks encourages some people to engage in aggressive and hateful speech and even incitement to crime,” said Mayss Abdel-Fattah, 26, a sociology student at the University of Zawiya.

“These ‘bad’ users of social networks feel that no-one will come to hold them accountable, which is very often the case in Libya.”

Despite the toxic posts that flood social networks, there are also rays of light that cut through the online fog of war.

A group of young Libyans in 2016 launched the “SafePath” group which now has 162,000 members on Facebook and provides a crucial public service: it updates users on which roads to avoid because of fighting.