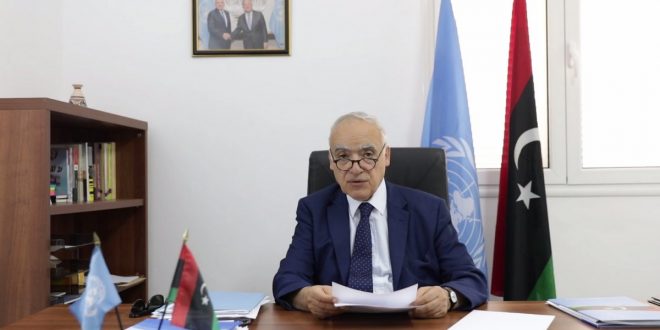 The UN’s Libya envoy warned on Thursday of “a widening conflagration” in the North African country, as deadly clashes spread south to a key military base.

Khalifa Haftar’s self-styled Libyan National Army (LNA), based in the country’s east, launched an offensive on April 4 to take Tripoli, the western seat of the UN-recognised Government of National Accord (GNA).

Envoy Ghassan Salame told AFP that Haftar’s push had ground to a bloody stalemate with pro-government forces around the capital.

“After the very first successes of the Libyan National Army two weeks ago, we are witnessing a military deadlock,” he said.

But Haftar’s force said clashes had erupted at a military base it holds some 650 kilometres (400 miles) south of Tripoli, killing four people and leaving six wounded.

LNA spokesman Ahmad Al-Mesmari accused a “terrorist group” of launching an attack on the Tamenhant air base near Sabha, but said LNA fighters had repulsed the assault.

The UN said it was “deeply concerned about reports of clashes between the two parties” around the base and “the potential for widening confrontations in other areas of the country”.

In a symbolic move, the GNA on Thursday issued an arrest warrant against Haftar for allegedly ordering deadly airstrikes against civilian areas.

A spokesman said it was seeking an international arrest warrant against Haftar for “war crimes“, as two UN experts were expected in Tripoli to investigate the origin of rocket fire that killed six people the previous day.

The unity government’s interior ministry also lashed out at France, accusing it directly for the first time of supporting Haftar and saying it was cutting security ties with Paris.

Salame told AFP that “international divisions” prior to the assault on Tripoli had emboldened Haftar, who is backed by Russia and seen by his allies Egypt and the United Arab Emirates as a bulwark against Islamists.

“There are countries that have invested in Mr Haftar as a champion of the fight against terrorism,” Salame said, without naming any countries.

“They will not drop him now even if they do not agree with his attack on Tripoli.”

Haftar’s offensive forced the UN to postpone a national conference that was to draw up a roadmap to elections in a bid to turn the page on years of turmoil since the 2011 ouster of dictator Muammar Gaddafi.