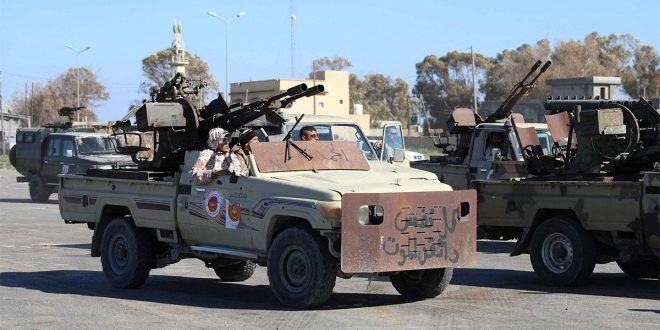 A British bid at the UN Security Council to demand a ceasefire in Libya faced opposition Thursday from Russia and the United States, raising doubts about prospects for a draft resolution to halt the bloodshed in Tripoli, diplomats said.

Britain put forward the measure after forces loyal to Khalifa Haftar launched an offensive on April 4 to seize Tripoli, a move that threatened to plunge the north African country into deep turmoil.

During a closed-door council meeting on Thursday, Russia again insisted that there be no references in the draft resolution criticizing Haftar while the United States appealed for more time to weigh its options, diplomats said.

The divisions among world powers deepened as fighting escalated in Tripoli, with the death toll now reaching over 200, while more than 25,000 people have been driven from their homes.

“We want to have this resolution,” German Ambassador Christoph Heusgen told reporters after the meeting. “We want to have a strong resolution… with a united council – everybody behind it – that says who is responsible and what needs to be done.”

“Not having this now is something that is frustrating,” he added.

UN diplomats however raised doubts over whether the council would be able to agree a text, with the US reluctance to take action throwing a new spanner in the works.

There was speculation that President Donald Trump’s administration may be consulting Egypt, a strong Haftar ally, and other players in the region, or with the Libyan leaders themselves, on how to address the crisis.

The council heard a briefing by video link from Tripoli by UN envoy Ghassan Salame, who raised concerns about the escalation in fighting and weapons flows to Libya.

Haftar, seen by his allies Egypt and the United Arab Emirates as a bulwark against Islamists, has declared he wants to seize the capital, now controlled by a UN-recognized government and an array of militias.

The military commander backs a rival administration based in eastern Libya that is refusing to recognize the authority of the Tripoli government.