Home / Normal / Egypt to host African summits on ‘stability’ in Sudan, ‘elimination of terrorism’ in Libya 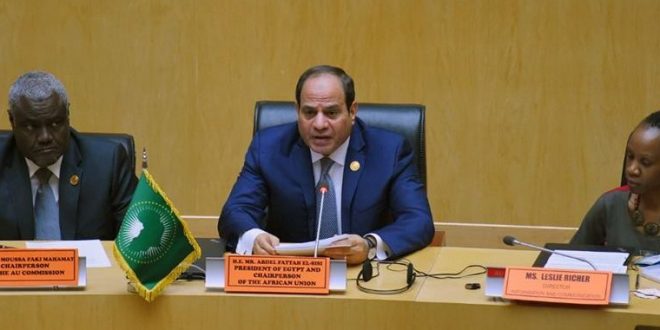 Egypt to host African summits on ‘stability’ in Sudan, ‘elimination of terrorism’ in Libya

Egypt will on Tuesday host two emergency summits with other African leaders to discuss ongoing events in Sudan and Libya, the office of Egyptian President Abdel Fattah al-Sisi said.

General Khalifa Haftar is currently waging an attack on the internationally recognised Libyan government in Tripoli, an assault which has already killed more than 250 people.

Sudan’s military overthrew former president Omar al-Bashir in a coup earlier this month following months of mass protests. Protesters are now engaged in a peaceful standoff with the military rulers in an attempt to produce a transition to civilian rule.

Sisi, the current president of the African Union (AU) who seized power in a 2013 coup, is a strong ally of Haftar, alongside the UAE and Saudi Arabia.

All three countries were also early to announce their support of Sudan’s new military rulers.

The African leaders will focus on the “evolution of the situation in Sudan’, where protests against martial rule and foreign interference are ongoing, at Sisi’s summit.

They will also seek to “stem the current crisis” in Libya.

For Sudan, the objective “is to discuss … the most appropriate ways to address the evolution of the situation and to contribute to stability and peace”, Egypt’s presidency said.

The AU has threatened to suspend Sudan if the military does not hand over power to a civilian authority by the end of the month.

President of the AU commission Moussa Faki is also expected to take part in the discussions, along with other officials from Ethiopia, South Sudan, Uganda, Kenya and Nigeria.

Another summit on Libya, which will bring together the leaders of Rwanda, South Africa and the Congo with Sisi, will focus on “relaunching a political process… (and) the elimination of terrorism”.