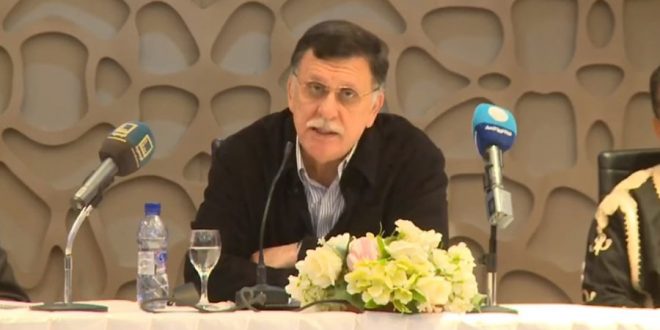 The Head of the Presidential Council Fayez Al-Sarraj has accused France of supporting warlord” Khalifa Haftar who started an offensive on April 04 on Tripoli.

In an interview with French newspaper Leberation, Al-Sarraj said Libyans were surprised to see France backing up a dictator.

He also said that when he received a phone call from French President Emmanuel Macron, he told him the Libyan public opinion is against France, adding that “we don’t want Libyans to hate France as it has a positive role in Libya.”

Al-Sarraj also told Bloomberg two days ago that there are countries backing up Haftar’s war on Tripoli.

Meanwhile, the Interior Minister Fathi Bashagha accused France of supporting Haftar, announcing a week ago a halt of security cooperation with the French, who a day later said they only support the “Government of National Accord.”

Al-Sarraj also underestimated the support of US President’s support to Haftar, saying the most important thing is the US State Department’s stance, which called on Haftar to stop his offensive.