Home / Normal / Is Haftar right in claiming there are terrorists and militias in Tripoli? 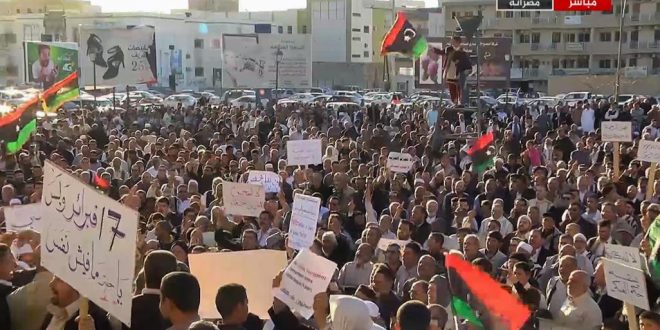 Is Haftar right in claiming there are terrorists and militias in Tripoli?

Field Marshal Khalifa Haftar, commander of the Libyan National Army (LNA), has long claimed that terrorists and rogue militias are controlling the capital Tripoli, placing his campaign as part of the international “war on terror”. In launching his attack on 4 April, his spokesperson repeatedly said that “terrorists” are fighting LNA on the outskirts of the capital.

The UN-recognised Government of National Accord (GNA), headed by Fayez Al-Sarraj, vehemently denies that any criminals, terrorists, sanctioned individuals or militia leaders are involved in the fight. Claiming full control over forces confronting the LNA.

Whose claims are true?

The situation on the ground stems from when the newly formed GNA was transferred, under Italian protection, to Tripoli three months after the Libyan Political Accord was signed in Skhirat Morocco, on 17 December 2015

Having neither army nor police force on the ground, the GNA, with the help of the UN, had to rely on the support of dominant militias including the Tripoli Revolutionaries Brigade (TRB), Special Deterrence Force and Nawasi Brigade. Between them they control most of the capital including Mitiga airport.

Once in the capital, the GNA found itself under the mercy of militias. I remember, in April 2016 Hashem Beshr, a TRB leader told me how he spent days negotiating with other militias to allow the GNA to come to Tripoli.

As a result, the GNA has become a political vehicle, enjoying international support, but in reality driven by a coalition of militias. It failed to implement a clause in the political accord that calls for disbanding and disarming militias in Tripoli.

One of the well-known terrorist in the capital was Mahdi Al-Harati who served as Tripoli mayor in 2014. An Irish citizen of Libyan descent and member of the former terrorist group Libyan Islamic Fighting Group (LIFG) led by the famous Abdelhakim Belhaj, Al-Harati returned to Libya in 2011 to join the fight against the Gaddafi regime. After the regime was deposed he served as commander of the TRB before leaving to Syria where he founded Liwaa Al-Umma, a Salafist armed group which later merged with Al-Nusra Front. There was a time when Al-Harati was recruiting fighters from Libya in broad day light in the middle of Tripoli. It is not clear if he is now in Tripoli but his supporters and former comrades are.

TRB itself became well entrenched in Tripoli and its military leadership went to the younger Haitham Al-Tajuri, famous for wearing Dolce and Gabbana T-shirts on the frontlines. Under his command TRB became more efficient in how to make money through a series of private companies, mainly import-export businesses, heavily subsidised by the GNA. At the same time all its members, mostly unemployed school dropouts, are on the GNA’s payroll. TRB is loyal to the GNA as long as it gives them a free hand to operate in the city.

Another famous former terrorist, who used to be a dominant shadowy figure in Tripoli, is Khalid Al–Sharif. He once served as deputy emir of the Libyan Islamic Fighting Group (LIFG) in Afghanistan under Belhaj. After the 2011 civil war Al-Sharif became director general of the defence ministry in successive governments from 2011 until 2016

At the same time, he was director of the notorious Hadba prison in southern Tripoli where former regime officials used to be tortured including Abdalla Sanousi, Gaddafi’s former intelligence chief. Al–Sharif was chased out of Tripoli by TRB in 2017 and found safety in Misrata from where he later appeared on video vowing to come back. His whereabouts are now unknown but LIFG elements are involved in the current violence.

Since 2014, Tripoli’s central square has been the scene of small weekly demonstrations calling for Haftar’s death and claiming his LNA is destroying Benghazi. Most Islamist leaders fled Benghazi to Tripoli where they continue mobilising supporters in western Libya. Among them is Benghazi Defence Brigades’ leader Mustapha Al-Sharkasi who recently compared the fight against the LNA to that against Gaddafi’s government in 2011

Each Friday, for nearly three months in 2015, I would go to the square to watch and listen as speaker after speaker took to the podium venting a barrage of hate against Haftar while calling for young people to join the “jihad” against the LNA in Benghazi. Defeated at the hands of the LNA in Benghazi, many top leaders moved to Tripoli and are now involved in the fight against their old enemy.

Some of them are believed to be linked to the now defunct Ansar Al-Sharia jihadist group. Ansar Al-Sharia is sanctioned as a terrorist group by the UN Security Council and accused of murdering the US ambassador in Benghazi in 2012

It is unlikely that any known Daesh operatives are present in Tripoli but sleeper cells linked to the group have carried out three attacks last year alone.

Then there are various – mainly Misratan – militia leaders. People like the notorious Salah Badi, commander of Al-Somood Brigade, who has also mobilised his forces to counter the LNA’s march on Tripoli. Badi is on the UN, US, and EU sanctions lists including asset freezes and travel bans. Badi is famous for the so called Libya Dawn attack on Tripoli in 2014 in which its international airport was destroyed. He personally appeared on video to cheer the destruction! The current GNA Minister of Interior, Fathi Bashaga, is also implicated in that war and in the 2012 invasion of Bani Walid in the southwest of Tripoli.

Libya’s self-styled Mufti has always issued fatwas for his followers to be involved in “jihad” against the LNA because it is led by “infidel” Haftar.

Another less famous supporter of jihad against the LNA, but frequent guest on religious talk shows is Abdulbasit Ghwilah; a Libyan Canadian former member of LIFG. Some commentators link him to the Manchester Arena bomber Salman Abedi on May 2017. Until recently Ghwilah was living in Tripoli.

The notorious migrant trafficker, Abdul Rahman Al-Milad, sanctioned by the UN, has also joined forces with groups in Tripoli to counter the LNA’s attack.

Does the GNA really know about those people? Certainly they do but at this point they need them. Undoubtedly Haftar’s claims are, at least partially, true but his offensive is likely to encourage even more jihadists and criminals to join the battle.