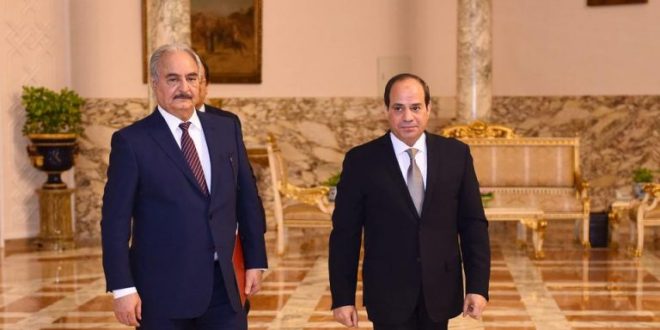 The sources in Al-Ahram Centre for Political and Strategic Studies (ACPSS) (governmental) said that Mohammed Najib military base, west of the country, includes an operating room, in coordination with Haftar forces, to follow the progress of battles.

In an exclusive statement to the NewKhaleej, the sources said that the meeting of the Egyptian President, Abdel Fattah Al-Sisi with Haftar in the Federal Palace, east of Cairo, a few days ago, aimed to assess the conduct of military operations, and the needs of forces backed by Egypt, the UAE and Saudi Arabia, to control the Libyan capital Tripoli.

Egypt justifies its support for the operation on the pretext of fears of the movement of the Daesh fighters from Syria to Libya, and then turning the western border of Egypt into a hot spot, according to the sources.

Air strikes by UAE fighter jets based at the Mohammed Najib air base are expected to weaken the defence front of the capital after the Misrata rebels join it.

It is noteworthy that Haftar was with Al-Sisi and Abu Dhabi Crown Prince Mohammed bin Zayed during the opening of the Mohammed Najib military base in July 2017, near the province of Mersa Matruh, close to the Libyan border.

The base includes operations and support centres, military formations, fighters of different types, training and shooting yards, ammunition stores, and tank and armoured vehicle positions, enhancing the capabilities of the Egyptian army to provide training and logistical support to the Haftar forces stationed in eastern Libya.

Media reports quoted Egyptian sources as saying that Al-Sisi has recently agreed to provide military assistance to Haftar in his battle against the internationally recognised Government of National Accord in the Libyan capital of Tripoli. This includes night vision equipment and jamming systems, in addition to deploying jamming vessels near the coast of Tripoli to try to impede the air force of the Government of National Accord from carrying out air attacks against Haftar forces, which had already caused heavy losses.

The sources stressed that the Egyptian aid came at a Saudi request from Cairo, in the context of the support provided by Riyadh to Haftar in the current military campaign.

International Relations and CooperationSecurity ForcesSecurity Situation
AllTripoli
2019-04-25
asaeid
Previous How will clashes in Libya affect refugees hoping to reach Europe?
Next Does Khalifa Haftar Have the Capacity to Become a New Mu‘ammar al-Qaddafi?