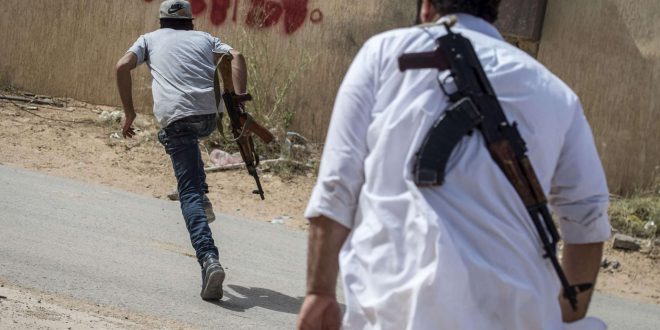 House-to-house battles as Libyan forces push back against Haftar

Government soldiers, some in jeans and t-shirts, took cover by abandoned buildings as they fired on Haftar’s positions. Some carried anti-aircraft guns they had had to remove from their trucks to get through the narrow streets.

Haftar’s Libyan National Army (LNA), which is allied to a rival administration in eastern Libya, mounted an offensive on Tripoli three weeks ago, but despite heavy fighting has failed to breach the city’s southern defences.

A Reuters news agency team visiting the southern suburb of Ain Zara on Sunday said they estimated that forces allied to the Tripoli-based Government of National Accord (GNA) gained up to 1,500 metres compared with a visit a few days earlier.

Other parts of the front line appeared unchanged and the situation remains fluid. Both sides have gained and lost territory within days or even hours during the fighting.

Meanwhile, Fayez al-Sarraj, head of the GNA, has ordered the arrest of 64 people, including two of Haftar’s sons and senior LNA commanders, on charges of “leading the aggression” on Tripoli.

The statement came as the GNA health ministry said at least four people were killed and 20 others wounded in LNA air raids overnight on Sunday. The “death toll could increase”, said Amin al-Hachemi, a spokesman for the ministry.

A pro-GNA military source told the AFP that the victims were civilians.

“Several sites were targeted by air strikes late on Saturday night, causing victims among civilians,” the source said, adding: “Most of the strikes hit areas in the district of Abou Slim… [but] none hit military targets.”

GNA accuses Haftar of using foreign planes to carry out air attacks, without naming a country of origin.

“This criminal conceals his failures and those of his soldiers at the gates of Tripoli by resorting to foreign aviation to hit unarmed civilians in the city,” spokesman Mohanad Younes said on the GNA’s official Facebook page.

Al Jazeera’s Mahmoud Abdelwahed, reporting from Tripoli, said clashes were ongoing in the vicinity of Tripoli’s inactive international airport, now held by the LNA. The airport was  “very strategic because if the government forces recapture it, they can easily cut the supporting line coming for Haftar’s forces from the city of Gharyan, south of Tripoli”, he said.

At least 278 people have been killed and more than 1,300 wounded in the clashes this month, according to a casualty toll released by the World Health Organization on Wednesday.

According to the International Organization for Migration, 39,000 people have been displaced by fighting along Tripoli’s southern districts.

The UN refugee agency has evacuated hundreds of migrants and refugees trapped in detention centres on the front line of the clashes, relocating them to temporary shelters in schools in Tripoli.

“We are concerned about the health conditions of the migrants, we sometimes handle patients with chronic diseases and pregnancy that need specialised clinics,” Ritaj Bin Khalifa, a medical worker, told Al Jazeera.

“We also provide the migrants with psychological support.”

Some Sudanese migrants told Al Jazeera they will be seeking asylum in other countries with the help of relief organisations.

Libya has been mired in chaos since the NATO-backed uprising that deposed and killed long-time ruler Muammar Gaddafi in 2011.