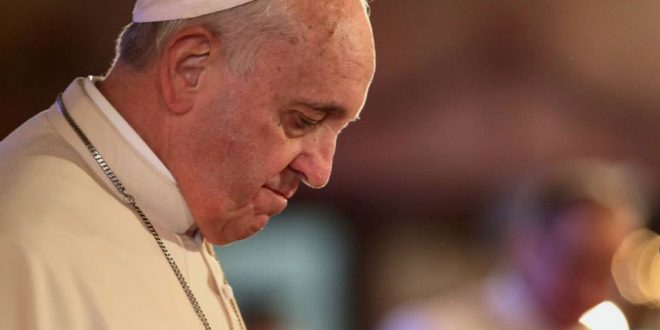 Pope appeals for evacuation of migrants from Libyan centres

Pope Francis has appealed for the evacuation of women, children and sick migrants trapped in Libyan detention centres as soon as possible through humanitarian corridors.

During his Regina Coeli prayer on Sunday, the pontiff said the refugees’ situation, “which is already very serious, has become even more dangerous due to the ongoing conflict”.

On Saturday, air strikes hit the Libyan capital as forces loyal to rogue general Khalifa Haftar pursued a campaign to take Tripoli from the UN-backed government based there – an offensive he launched at the start of April.

The pope has previously referred to the wretched conditions of migrants in Libyan detention centres, particularly those who are sent back after trying to reach Europe by boat.

Returning from Ireland last August, he told reporters he had seen a smuggled video of migrants being tortured and said: “You have to think hard about sending them back.”

Scores of vulnerable refugees and migrants have reportedly been freed from detention centres only to be forced to fight for militias linked to the UN-recognised Libyan government on the frontlines of its offensive against renegade Haftar, according to The Sunday Telegraph.

The EU has given tens of millions of euros to support the Libyan coastguard, who are tasked with intercepting boats full of migrants and refugees and returning them to land, where they are then detained.

There are approximately 6,000 refugees and migrants currently being held in detention centres in Libya. More than 2,700 are in areas affected by clashes, according to the UN.

Migrants and refugees were also shot at indiscriminately by Haftar’s forces last week. At least ten people were seriously wounded, according to detainees.

At least 278 people have been killed so far in the battle over Tripoli, according to the World Health Organisation (WHO).

At least 35,000 people have been forced to flee their homes, according to the UN.