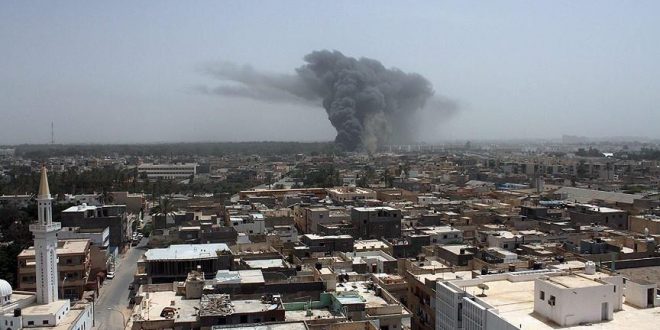 But Amin al-Hachemi, a spokesman for the Government of National Accord’s healthy ministry, on Sunday warned that “the death toll could increase in the coming hours”.

A pro-GNA military source said the victims were civilians.

“Most of the strikes hit areas in the district of Abou Slim… (but) none hit military targets.”

Strongman Khalifa Haftar’s LNA launched an offensive against Tripoli, the seat of the GNA, on April 4.

But after initial gains, Haftar’s forces have encountered stiff resistance on the southern outskirts and his troops have been pushed back in some areas.

LNA spokesman Ahmed al-Mesmari said the strikes had targeted a “barracks” and “weapons caches” in the Al-Fallah neighbourhood next to Abou Slim.

The LNA also fired on the waterfront headquarters of the Nawasi armed group, one of the key pro-GNA militia controlling the capital’s east, along with other targets in the suburbs of Tajoura and Ain Zara, he said in a press conference.

“Our strikes are very accurate and target weapons and ammunition depots,” he said.

At least 278 people have been killed and more than 1,300 wounded in the clashes, according to a toll released Wednesday by the World Health Organization.

The GNA accuses Haftar of using foreign planes to carry out air strikes, without naming a country of origin.

“This criminal conceals his failures and those of his soldiers at the gates of Tripoli by resorting to foreign aviation to hit unarmed civilians in the city,” spokesman Mohanad Younes said on the GNA’s official Facebook page.

The LNA’s Mesmari accused the GNA of bombarding the areas of Tarhuna, Esbea and Soug el-Khamis southeast of the capital.

“All its targets were civilians,” he said, alleging the strikes killed one woman and child and wounded four others.

LNA jets on Sunday targeted the “Al-Bunuan Al-Marsous militia (from Misrata) in Ghot el-Rommane” east of the capital, he said.

On April 18, Russia and the United States opposed a British bid backed by France and Germany at the UN Security Council to demand a ceasefire in the North African country.

The White House revealed the next day that Donald Trump had reached out personally to Haftar in a phone call, during which the US president “recognised Field Marshal Haftar’s significant role in fighting terrorism and securing Libya’s oil resources”.

The country has been mired in chaos since the uprising that deposed and killed dictator Moamer Gaddaffi in 2011.