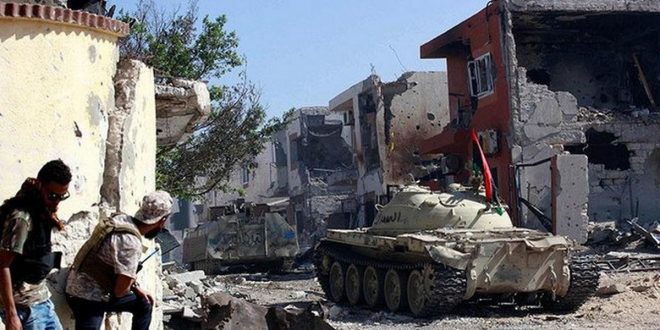 The airstrikes wounded at least 37 people, the internationally-recognised government said, on the same of a similar attack on the capital that killed another four civilians and injured 20.

“The toll may rise given that victims have been transported to private hospitals.”

The parts of Tripoli struck were Abou Slim, a densely-populated residential area in the south, and Ain Zara, a southern suburb that has seen several violent clashes in recent weeks.

A spokesman for the LNA confirmed Saturday’s strikes on the capital, but said they were aimed at military targets.

“The capital is experiencing an escalation in the military offensive, war crimes, and indiscriminate bombings of residential areas, public facilities and infrastructure,” Mohanad Younes, a spokesman for the GNA, said on the government’s Facebook page.

“Unmanned foreign planes participated in these raids, the latest ones having hit homes in Ain Zara and Abou Slim,” said Younes.

The responsibility for these acts, he added, rests “with the states which support the belligerent forces of the criminal Haftar”.

Haftar’s LNA launched an offensive against Tripoli, the seat of the internationally-recognised GNA, on 4 April.

After initial gains, Haftar’s forces have encountered stiff resistance on the southern outskirts and his troops have been pushed back in some areas.

At least 278 people have been killed and more than 1,300 wounded in the clashes, according to a toll released Wednesday by the World Health Organisation.

The GNA accuses Haftar of using foreign planes to carry out airstrikes, without naming a country of origin.

On Monday, a senior UN official warned that fierce fighting for control of Libya’s capital that has already displaced tens of thousands of people threatens to bring a further worsening of humanitarian conditions.

“As long as the situation continues, even if it just stagnates and continues like this, we can expect to see a continuing deterioration,” UN humanitarian coordinator for Libya Maria do Valle Ribeiro told AFP.

“When we see the use of air power, the indiscriminate shelling of densely populated areas, it is very difficult to be optimistic,” said do Valle Ribeiro, who is also the deputy UN envoy to Libya.

Among the most vulnerable are about 3,500 migrants and refugees held in detention centres near the combat zone who are at “risk”, the UN official said.

She said that 800 considered most in danger had been evacuated, after the UN and rights groups said gunmen attacked a detention centre south of Tripoli last week.

Doctors Without Borders (MSF) said several migrants and refugees were shot and wounded in the attack.

The UN official also voiced concern over a breakdown in basic services, including electricity and water supplies, and said more relief funds were needed for Libya.

“We appealed for an additional 10.2 million (dollars) which doesn’t cover all that we foresee… but it covers at least the essential response for the first three, four weeks,” she said.

During the first week of fighting, she said, “over a million schoolbooks” that were stored in a warehouse of the ministry of education were destroyed when the compound was hit.

“Symbolically, it says a lot about the impact of such strife and clashes on not just the immediate survival of people but on the future of Tripoli children.”

On April 18, Russia and the US opposed a UK bid – backed by France and Germany – at the UN Security Council to demand a ceasefire in the North African country.

The White House revealed the next day that Donald Trump had reached out personally to Haftar in a phone call, during which the US president “recognised Field Marshal Haftar’s significant role in fighting terrorism and securing Libya‘s oil resources”.

Libya has been mired in chaos since the NATO-backed uprising that deposed and killed dictator Muammar Qaddafi in 2011.