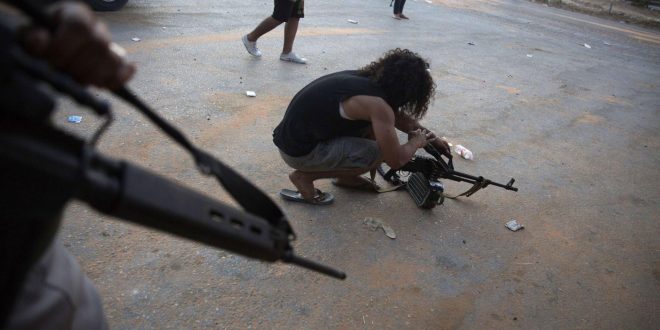 Haftar launched an assault on Tripoli at the start of April in an ongoing attempt to seize Libya‘s capital from the internationally recognised Government of National Accord (GNA).

The UAE, along with Egypt and France, support Haftar and his self-styled Libyan National Army, who they consider a bulwark against Islamist militants. A 2017 UN report said the Gulf state provided his eastern-based LNA with military and logistical support.

“Priority in Libya (is) to counter extremism/terrorism and support stability in long drawn out crisis,” UAE Minister of State for Foreign Affairs Anwar Gargash said in a Twitter post.

The UAE hosted talks last February between Prime Minister Fayez Serraj and Haftar in which the two sides agreed on the need for national elections.

The head of Libya’s internationally recognised government has blasted France for its alleged support of rogue General Khalifa Haftar’s attack on Tripoli. Sarraj denounced Paris for backing a “dictator”, in his harshest criticism yet of French diplomacy.

The UN humanitarian coordinator for Libya warned the ongoing conflict threatens to bring a further worsening of humanitarian conditions in the country on Monday. Fierce fighting for control of the capital has displaced tens of thousands of people and killed hundreds so far.

Haftar’s LNA launched an offensive against Tripoli on April 4. But after initial gains, Haftar’s forces have encountered stiff resistance on the southern outskirts and his troops have been pushed back in some areas.

The Gaddafi-era general launched his attack just as UN chief Antonio Guterres visited the North-African country ahead of a planned conference aimed at paving the way for elections in the country. The conference has been postponed as hopes for a peace deal diminish.