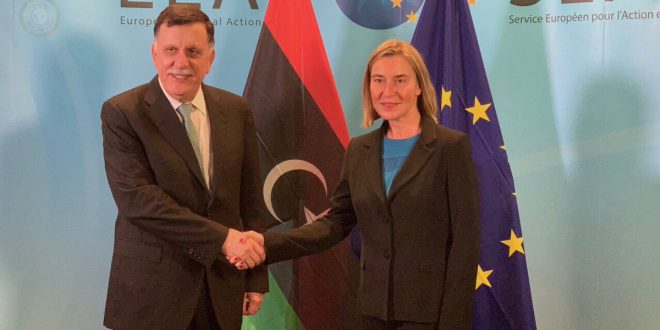 Haftar, who is currently leading an assault on Tripoli, has urged his troops to “wipe out” government forces.

Prime Minister Fayez al-Sarraj, who heads the Tripoli-based Government of National Accord (GNA), will on Tuesday start a series of meetings with the leaders of Italy, Germany, France and possibly the UK, the foreign ministry said.

The visit to France – where Sarraj’s government said he would meet President Emmanuel Macron – comes after the GNA repeatedly accused Paris of politically backing the assault which Haftar’s self-styled Libyan National Army (LNA) launched on Tripoli on 4 April.

The offensive to oust the GNA from the capital has set off another deadly escalation in a country mired in violence since the fall of dictator Muammar Gaddafi in 2011.

Ahead of Sarraj’s tour, Haftar urged his troops to “wipe out the enemy”, in a message read out by LNA spokesman General Ahmad al-Mesmari late on Sunday, echoing similar comments made by Gaddafi during a pro-democracy uprising in 2011.

“Officers and soldiers of our armed forces and affiliates, I greet you during these glorious days and call on you to inflict on the enemy, with your force and determination, an even harder and bigger lesson than before,” the message said.

Forces backing the GNA recently launched a counter-offensive against the LNA, leading to a stalemate on the southern outskirts of the capital.

Haftar also vowed that “in the event of a retreat by the enemy, troops should pursue it with speed and force, prevent it from fleeing and wipe it out” with support from LNA air forces.

“Respect the lives of citizens and their goods,” the message added. “Carry out the orders of this letter and those of your superiors.”

Haftar’s remarks came just hours after the United Nations mission in Libya (UNSMIL) called for “an extendable one-week humanitarian truce” starting at 4am (2am GMT) Monday, to mark the beginning of the holy Muslim month of Ramadan.

Sarraj hopes to “gather support against the aggression” by Haftar, the GNA foreign ministry in Tripoli said.

He will hold talks with Italian Prime Minister Giuseppe Conte in Rome on Tuesday morning before travelling to Berlin to meet German Chancellor Angela Merkel, it said.

He will meet Macron in Paris on Wednesday, a statement said, while a visit to London is also being considered.

The UK has pushed for a resolution at the UN Security Council demanding a ceasefire in Libya but its efforts have foundered amid divisions at the world body, namely opposition from Russia and the US.

Italy, Libya’s former colonial power, is a key backer of the GNA and has echoed calls by Merkel for a “unified” European position and a political solution to resolve the crisis.

But there is anger in Tripoli over perceived French backing for Haftar and Libyans have taken to the streets of Tripoli accusing Paris of double dealing. France denies the accusations.

Last month Sarraj told French daily Liberation: “We are surprised that France does not support our government that is democratic, but supports a dictator.”

Haftar is backed by Egypt and the UAE, while the GNA’s status with world powers is increasingly shaky.

Russia has said it is not taking sides in the fighting in Libya but behind the scenes, experts have said, Moscow is firmly backing Haftar.

Since 4 April, fighting between the LNA and forces backing the GNA has killed at least 432 people, wounded 2,069 and displaced some 55,000 others, according to the UN.

At home, Libya’s 188-seat parliament on Sunday came a step closer to splintering.

A group of 42 dissident lawmakers selected a “provisional” speaker, in opposition to the current speaker Aguila Salah, who is aligned with Haftar.

The dissident lawmakers last week met in Tripoli, where they declared the war “unjustified” and on Sunday named Sadeq al-Keheli, their most senior member, as “interim” speaker for a 45-day period.