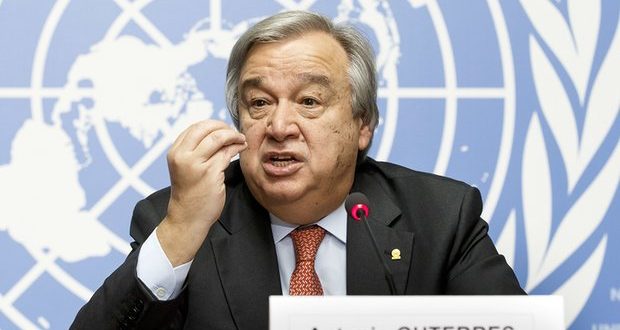 UN Secretary-General Antonio Guterres on Monday called on all parties to the Libyan conflict to commit to a ceasefire and halt the ongoing offensive on Tripoli.

“My position is very clear — it is an appeal to a ceasefire, which means cessation of hostilities, which means no more offensive”, Guterres told reporters.

Guterres urged all foreign actors to stop intervening in the conflict and let Libyans resolve the crisis by themselves.

The UN Secretary-General also expressed hope that improved conditions in Libya would enable moving forward with the National Conference, which was postponed due to the resumption of fighting.

“What we need is to end foreign interferences to allow Libyans to once again come together to discuss seriously politically a way through. We had common initiatives… a National Conference to take place in Libya”, Guterres said. “We hope that conditions will be established allowing for this [initiative] to move again in the future”.

On 4 April, the Libyan National Army’s (LNA) began an offensive on Tripoli, which is controlled by the UN-backed Government of National Accord (GNA). The GNA announced two days later a counteroffensive dubbed Volcano of Rage.According to the World Health Organization, more than 430 people have been killed and more than 2,000 have been wounded since the beginning of the offensive on Tripoli.

Libya has been suffering from unrest since 2011, when its long-time leader, Muammar Gaddafi, was overthrown and killed. Since then the country has been split between two rival governments, with an elected parliament, supported by Haftar’s army, governing the country’s east, and the GNA governing the rest of the country from Tripoli.