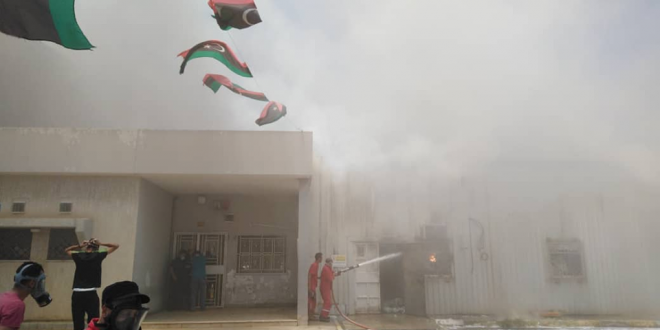 The Libyan National Oil Corporation (NOC) has confirmed that the Tripoli Oil Clinic fire in Gharghour area that took place on Friday was caused by direct shelling of the facility.

NOC explained on Sunday that an internal security agency investigation and forensics report reviewed debris found in the destroyed warehouse, adding that shelling of civilian targets is a war crime.

The NOC condemned in the strongest possible terms the targeting of civilian infrastructure and medical facilities, saying the incident did not result in casualties, yet the corporation is extremely concerned that hospital patients and staff were purposefully endangered.

“NOC calls for an international investigation and prosecutions following this breach of international humanitarian law.” The statement reads.

The Chairman of the NOC, Mustafa Sanallah said the targeting of such a facility is a heinous act, adding that attacks on civilian infrastructure as well as the oil sector have unfortunately become an everyday occurrence.

“Only through God’s grace were patients and staff spared. A ceasefire must be called to put an end to this senseless violence.” Sanallah remarked.

Khalifa Haftar’s aircraft have been carrying out airstrikes on a daily basis on targets in Tripoli, most of which are civilian and the most recent of which was Rexos compound in Tripoli, where House of Representatives’ meetings take place.