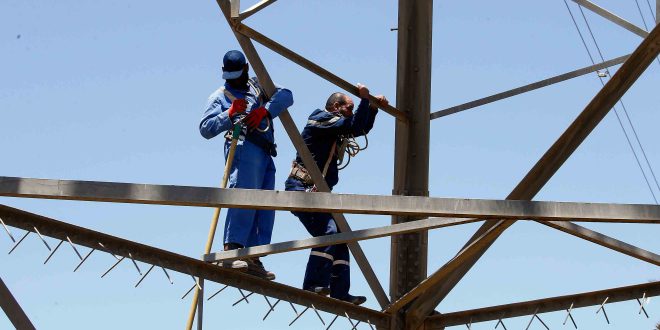 War-torn Libya’s electricians battle to keep the lights on

Precariously perched 50 metres up an electricity pylon providing power to Libya’s capital, Mohamad Dahman attempts to fix damage caused by fighting – but hastily descends when a rocket explodes nearby.

“We’re used to working under bombing,” he says.

“Our repair teams have been at high risk since 2011”, the year a NATO-backed uprising toppled dictator Moamer Kadhafi, plunging the country into years of bloody chaos.

On the road leading to Tripoli’s long-disused international airport, fighting has raged since early April when eastern-based military strongman Khalifa Haftar launched an assault to seize the capital from Libya’s unity government.

The only traffic on the highway today consists of tanks and armoured vehicles. Most residents have fled.

High-voltage cables run along the road for 30 kilometres, carrying electricity to the capital, but they are regularly damaged by the fighting.

Despite the heat, Ramadan fasting and “the danger of being hit by random rockets”, Dahman says he keeps coming back to fix them.

“Hopefully we can make things easier for people by shortening the blackouts.”

Later on, as they were repairing another pylon, he and his team came under heavy fire and had to leave the area in a hurry.

Mohamad Abdallah, human resources manager at the national General Electricity Company of Libya (Gecol), says each damaged transmission tower can take up to 48 hours to repair.

“The fighting means we can’t finish operations” on the many pylons that need fixing, he says.

Libya has faced chronic electricity shortages since 2011, particularly during the cold of winter and the searing heat of summer.

The supply is rationed, with cuts averaging more than ten hours a day during the summer season when air conditioning is indispensable.

For now, the weather is mild.

But power outages may worsen in the heat of the desert summer, exacerbated by the damage caused by fighting between Haftar’s self-styled Libyan National Army and armed groups nominally loyal to the Tripoli-based unity government.

“They’ve hit every part of the network, from the wires to the pylons and the distribution stations,” he says at his office near the airport highway.

He explains that some installations have been completely destroyed, particularly in regions near the airport which have seen fierce fighting.

“It keeps happening – every day there are new bombings,” he says.

Even before Haftar’s offensive began, Gecol estimated that fighting and looting since 2011 had caused more than a billion dollars-worth of damage to its network.

“We’re expecting a 1,000 megawatt shortfall in the middle of summer,” Geneidi says, predicting that the network could produce around 6,000 megawatts – providing it isn’t damaged further.

The latest round of fighting has also forced two European companies at a power station west of Tripoli, one Italian and one Austrian, to halt operations and evacuate their staff.

Other firms from South Korea, Turkey and Germany had to suspend projects to build new power stations under contracts signed prior to the 2011 uprising.

The reluctance of foreign firms to return to the volatile country means it relies on its neighbours, Algeria and Tunisia, for electricity.

“We’re counting on the national spirit of Libyans to help us by reducing their electricity use during the summer peak times,” Geneidi says.

But with another scorching summer approaching, many will find it hard to resist the temptation to crank the air conditioning up to full blast whenever the power is on.