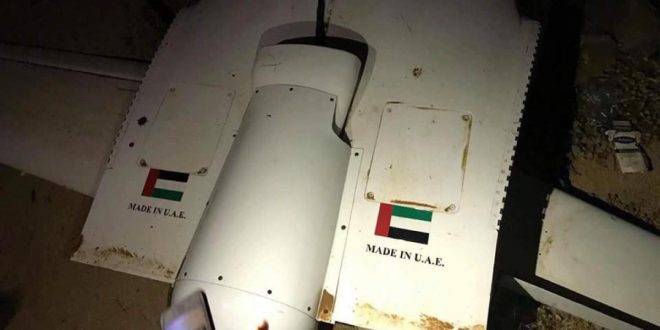 Tripoli forces claim shooting down ‘Made in UAE’ drone

A “Made in UAE” unmanned aircraft was shot down south of the capital Tripoli, said the UN-recognized Libyan government in Tripoli on Sunday, Anadolu reports.

The Government of National Accord (GNA) forces on their Facebook page posted photos of the drone on which the UAE flag and “Made in UAE” are inscribed.

The drone was carrying out operations with the support of the forces loyal to general Khalifa Haftar, the GNA forces claimed.

According to local media reports, the drone was downed in the military axis of Al-Sawani, some 30 kilometers (19 miles) southwest of Tripoli. Haftar and Abu Dhabi have yet to comment on these claims.

On April 4, Haftar, who is affiliated with a rival government based in eastern Libya, launched a wide-ranging campaign to capture Tripoli.

After several weeks of fighting on Tripoli’s outskirts, however, Haftar’s campaign has thus far failed to achieve its primary objective.

Libya has remained beset by turmoil since 2011, when long-time leader Muammar Gaddafi was ousted and killed in a bloody NATO-backed uprising after four decades in power.

The oil-rich country has since seen the emergence of two rival seats of power: one in eastern Libya, with which Haftar is affiliated, and the Tripoli-based GNA, which enjoys UN recognition.