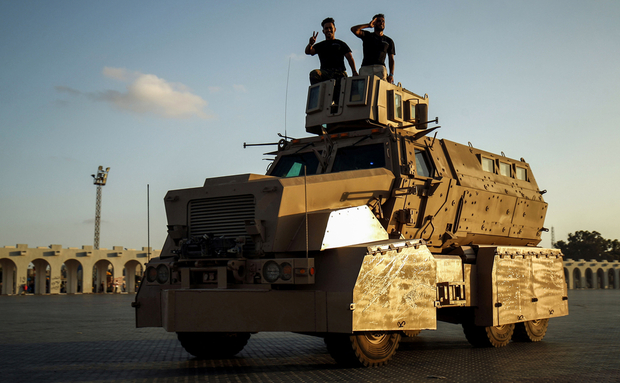 Members of the self-styled Libyan National Army, loyal to the country's east strongman Khalifa Haftar, flash the victory gesture from atop an armoured vehicle in the eastern city of Benghazi on July 27, 2017. / AFP PHOTO / Abdullah DOMA

Paramount Industrial Holdings has denied supplying Mbombe 6 armoured vehicles to any forces in Libya.
“Libya is the subject of a UN arms embargo. Paramount Group will not sell or deliver any equipment to a country under embargo.” The South African Company told Daily Maverick.
The South African company Paramount Industrial Holdings added that it is checking whether the Jordanian government sold on any of its armoured vehicles to forces fighting a civil war in Libya.
Paramount has denied selling any such vehicles directly to Libya, but has confirmed selling some to Jordan.

“It has been brought to our attention through reports on social media that Mbombe 6 armoured vehicles might have been delivered by the Jordanian Government to forces in Libya,” Paramount Group director of communications Nico de Klerk said in response to inquiries from Daily Maverick.

Jordan has stepped in into the ongoing fighting on the outskirts of Tripoli as evidence has proved it has provided an unknown number of its indigenous KADDB Al-Mared 8×8 armoured vehicle to Khalifa Haftar’s forces.