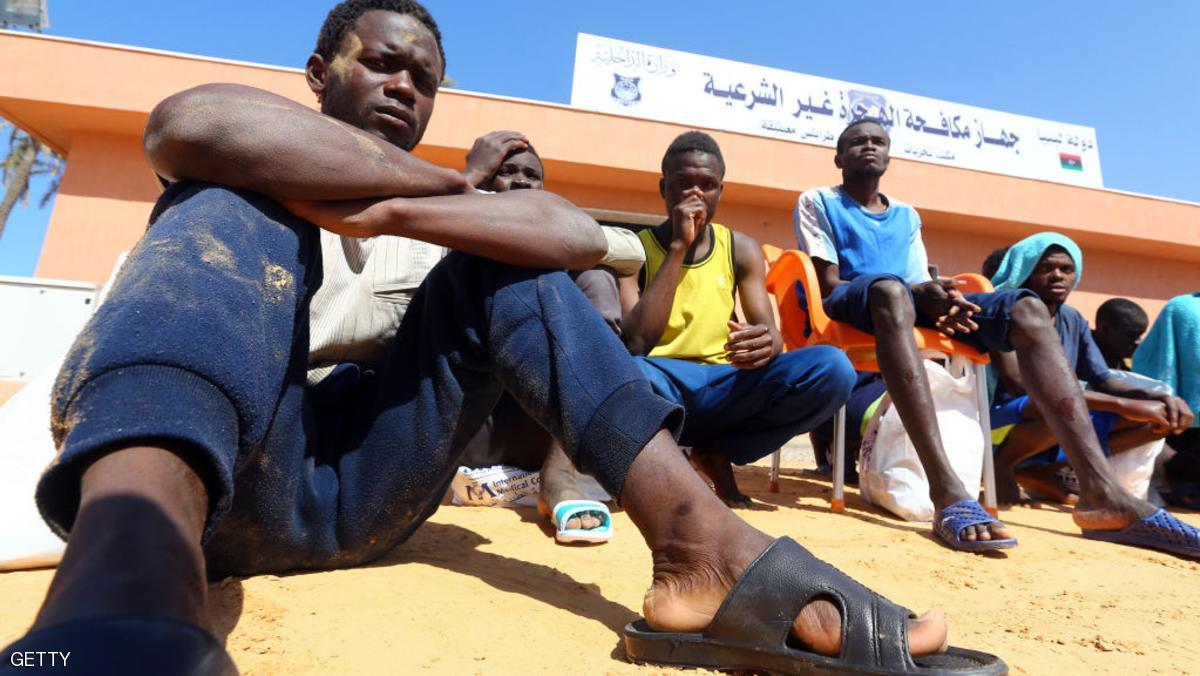 African migrants, whose boat sank off the Libyan coast, gather upon their rescue at the Tripoli branch of the Anti-Illegal Immigration Authority, in the Libyan capital on April 13, 2017. At least 97 migrants went missing after their boat sank off the Libyan coast, a navy spokesman said. The Libyan coast guard had rescued 23 migrants of various African nationalities, who were found clinging to a floating device, just under 10 kilometres (6 miles) off the coast of Tripoli. / AFP PHOTO / MAHMUD TURKIA (Photo credit should read MAHMUD TURKIA/AFP/Getty Images)

Thousands of refugees and migrants trapped in detention centres across Libya should be evacuated to Europe, the international medical charity Doctors Without Borders (MSF) has said.

Rights groups have documented cases of abuse and torture in the Libyan centres, while a two-month conflict around the capital Tripoli has made the situation worse.

“There are no safe places in Libya to take these migrants and refugees in order to remove them from the risk of conflict,” Sam Turner, MSF head of mission in Libya said at a press conference on Tuesday.
“This is why we are urgently calling for their humanitarian evacuation”.

The North African country has been mired in turmoil since longtime ruler Muammar Gaddafi was removed in 2011, with rival administrations based in different parts of the country vying for power.

Libya is also the main conduit for African migrants and refugees trying to reach Europe, with nearly 6,000 people confined in detention centres, according to MSF.

The charity also called on EU governments to stop supporting the Libyan coastguard, which intercepts vessels transporting migrants and refugees and sends them to detention centres.

According to MSF, there are more than 5,800 migrants and refugees held in Libyan detention camps, some of which are located near fighting between forces loyal to the Tripoli-based government of national unity and those who support the renegade general Khalifa Haftar.

Since Haftar’s Libyan National Army (LNA) launched an assault on Tripoli in early April, at least 510 people have been killed and 75,000 displaced, according to the World Health Organization.

The migrant detention centres are frequently in inappropriate places such as former schools, hangars and other buildings, sometimes with the windows bricked up.

“You have less than a square metre per person in many detention centres,” MSF head of mission in Misrata and Khoms, Julien Raickman said.

Hundreds more migrants and refugees are held by armed groups elsewhere in the war-torn country.

“The number of people who are in detention centres is unacceptable in terms of suffering. But this is a small figure for which solutions are possible. It’s doable,” Raickman said.

The charity also noted the irony of flying some migrants to Europe after getting them out of detention centres, while at the same time the Libyan coastguard prevents migrants from crossing the Mediterranean for Europe.

“We managed to evacuate 400 people from these camps [in recent weeks] but at the same time the Libyan coastguard has returned 1,200 people intercepted at sea,” Raickman added.

European Union cooperation with Libya has been credited with sharply reducing the number of migrants arriving in Europe from North Africa and the Middle East from a 2015 peak.

Italy’s tough line on immigration and asylum seekers has seen many boats that pick up migrants to make the perilous journey across the Mediterranean increasingly return them to chaos-wracked Libya.

But there they face trafficking, kidnap, torture and rape, according to the United Nations and aid groups.