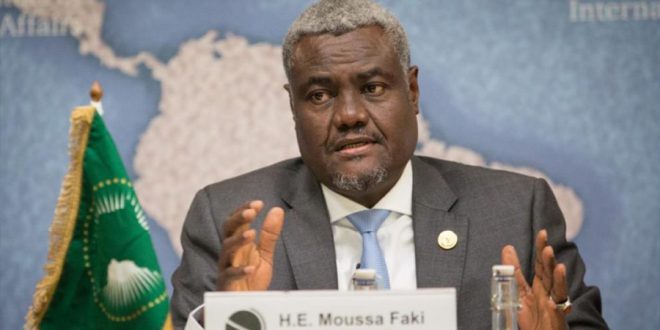 The Chairperson of the African Union Commission Moussa Faki told reporters Thursday that there can be no military solution to the Libyan crisis.

Faki told French newspaper Jeune Afrique that the Libyan Reconciliation Conference that is scheduled in next July in Addis Ababa won’t be held till a ceasefire is reached in Tripoli.

Faki also called for an end to hostilities in Libya and a return to dialogue to find a way out of the conflict and reach a consensus about elections, adding that foreign intervention in the country has become clear and some countries are fueling the conflict by flowing arms into Libya.

Last April, the African Union announced a Libyan Reconciliation Conference after the then April-14-16 UN-brokered National Conference that was supposed to take place in Ghadames but interrupted on April 04 by Khalifa Haftar’s attack on Tripoli.