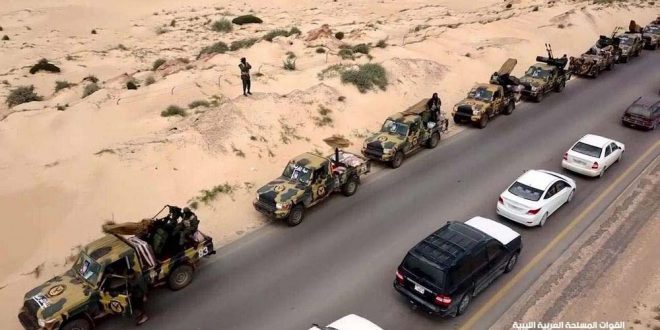 Gharyan is the main forward base for the eastern-based Libya National Army (LNA) under Haftar which has been fighting to take control of Tripoli for almost three months.

Mustafa al-Mejii, a spokesman for forces loyal to the internationally-recognised Government of National Accord, told AFP news agency: “Gharyan is under our total control.”

Dozens of pro-Haftar fighters were killed and at least 18 were taken prisoner, he said.

“Gharyan has been very strategic as it has been used as a supporting hub alongside the city of Tarhunah for Haftar forces fighting the UN-backed government in southern Tripoli,” Al Jazeera’s Mahmoud Abdel Wahed reporting from Tripoli said.

The claim came after the spokesman for Haftar’s forces accused “sleeper cells” of allowing the Government of National Accord (GNA) forces to enter part of Gharyan, nearly 80km southwest of Tripoli, without admitting to the loss of the town.

He said the fighting was ongoing and that the situation was under control.

Witnesses told Reuters that GNA troops seized the main operations room of the LNA in Gharyan, as well as LNA vehicles and other gear. The town hosts LNA field hospitals and is also where supplies arrive from the east.

The LNA has set up a helicopter base outside the town.

Images were circulated on social media networks of GNA forces patrolling Gharyan and of prisoners said to be pro-Haftar fighters.

Mejii hailed what he described as a “significant victory” and said he now expected Haftar’s forces to “collapse”.

“Military sources in the government said they have taken control of several strategic locations in the city, including the central command of Haftar forces that has been used to run the battle in Tripoli,” the Al Jazeera correspondent said.

“The campaign to take over Tripoli was launched from Gharyan as well as Tarhunah. It seems to be a major setback for Haftar forces as they have only one city left in the west of Libya supporting their military campaign.

“Meanwhile, in southern Tripoli, Haftar forces have been losing strategic locations such as inactive old international airport and neighbourhoods in southeastern and southwestern, including Ain Zara and Khallat Farjan.”

Libya has been mired in chaos since a NATO-backed uprising that toppled and killed longtime ruler Muammar Gaddafi in 2011, with a multitude of militias vying for control of the oil-rich country.

Haftar ‘intends to be a dictator’

Jonathan Winer from the Middle East Institute said: “If true, it’s a very big development. Gharyan is a major town and it has a population of nearly 200,000 people. It’s strategically been significant.

“So it’s a big loss for Hafar and his forces if that’s what happened,” said Winer, a former US special envoy to Libya.

Haftar, a retired general who took part in the revolt against Gaddafi, unleashed an offensive in May 2014 to purge Libya of armed groups he branded “terrorists”.

After a rapid advance from the east and south of the country, Haftar seized Gharyan on April 2, and two days later launched an offensive on Tripoli where the GNA is based.

But counterattacks by forces loyal to the GNA have resulted in a stalemate on the capital’s southern outskirts.

“He [Haftar] told me in 2016 that he wanted to take Libya by conquest. He does not really want to participate in the political process. He does not want to be subject to anyone else,” Winer said.

“What I understand he intends to be a dictator subject to no political force of any kind whatsoever, without any politician in the country having any power. That’s his vision,” he said.

Winer added that people have been trying to convince him to agree to a political arrangement to be part of some kind of a military council under civilian authority. “And he has repeatedly rejected that formula.”

The battle for Tripoli has killed over 650 people, including combatants and civilians, according to the World Health Organization. More than 94,000 have been displaced by the fighting.