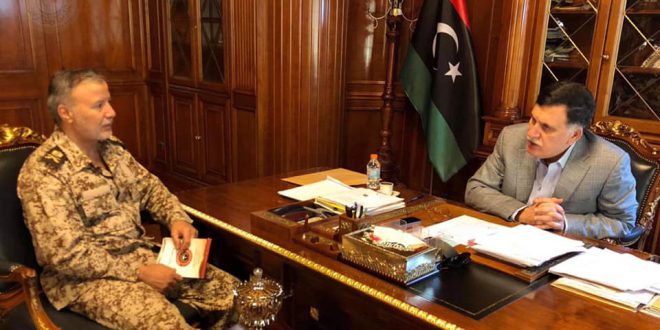 The Head of the Presidential Council Fayez Al-Sarraj has met with the commander of the western military zone Osama Al-Juwaili to discuss the requirements of the next stage of the battle to defend Tripoli against the attacks of Khalifa Haftar’s forces.

The meeting in Tripoli on Tuesday went over the latest developments on military and security levels as well as the latest on the frontlines in the western military zone.

Al-Sarraj and Al-Juwaili discussed last coordination among the military factions on frontlines, with the former hailing the liberation of Gharyan and the valor of all fighters on all other frontlines across the country.

Last week, Libyan Army forces seized Gharyan city from Haftar’s forces – a main base for the forces and a major supply line for the battle in southern Tripoli.