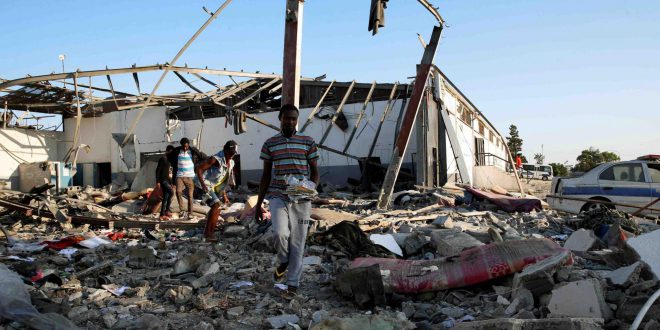 ‘European governments cannot pretend Libya is a place of safety’

An air raid on a detention centre in Tripoli that killed and wounded scores of migrants and refugees has intensified calls for a change in policy in the central Mediterranean as thousands of people remain trapped in such facilities amid intense fighting on the outskirts of Libya’s capital.

Officials said Tuesday’s attack on the centre in Tripoli’s eastern suburb of Tajura killed more than 50 people, including children, and wounded over 130.

The UN’s special envoy to Libya, Ghassan Salame, said the attack “could clearly constitute a war crime”, while the UN’s refugee agency (UNHCR) and the International Organization for Migration (IOM) called for an investigation.

Sonal Marwah, advocacy manager for Doctors Without Borders (known by their French initials MSF) Libya and SAR mission, told Al Jazeera that many of the 600 migrants and refugees at the centre had remained at the same location, arranging mattresses outside the cells for fears of further attacks.

The UN-recognised Government of National Accord (GNA) in Tripoli blamed forces loyal to renegade military commander Khalifa Haftar, who, in early April, launched an offensive to take control of Tripoli.

Haftar’s self-declared Libyan National Army (LNA) denied responsibility. Earlier this week, it had announced its intention to start bombing targets in Tripoli after “traditional means” of war had been exhausted.

An estimated 6,000 people are being held throughout the country in camps run by Libya’s Department for Combating Illegal Migration (DCIM). Almost half of those are held in and around Tripoli, according to UNHCR and the IOM. Thousands more are believed to be held in camps run by militias.

The dire conditions in the detention centres have further deteriorated since the fighting began, with detainees reporting being starved, abused and beaten.

In May, the women’s section of the Tajoura detention centre was hit by shrapnel, narrowly missing an infant. In April, migrants and refugees were relocated from the Qasr bin Ghashir detention centre near Tripoli to another centre after armed men stormed the facility leaving several dead and wounded.

“European governments cannot pretend that Libya is a place of safety, where very vulnerable refugees and migrants rescued at sea can be disembarked,” she added. “This is not something new. The UN has repeatedly said that Libya is not a safe place for disembarkation.”

Human-rights and humanitarian groups have stepped up their calls for the centres to be shut in the aftermath of the attack, with Interior Minister Fathi Bashagha tweeting on Thursday afternoon that the GNA was discussing such a move.

Brought back to Libya

Libya is one of the main departure points for refugees and migrants who try the treacherous crossing across the Mediterranean Sea in their bid to escape conflict, hardship and prosecution. But many are “pulled back “to Libya by the country’s coastguard, in a scheme supported by the EU under a two-year-old deal.

UNHCR figures show that more than 1,300 people were intercepted by the Libyan coastguard in June and taken back to detention centres across the country – 458 disembarked in Tripoli while more than 200 ended up in Tajoura.

Since the start of the year, nearly 3,700 migrants have been intercepted by the Libyan coastguard and forcibly returned to camps in Libya.

“We bring them back but we don’t do much to improve the conditions of those who are [in detention], and we don’t offer any places to evacuate vulnerable people out of Libya,” said Matteo Villa, a migration research fellow at Italian Institute for International Political Studies (ISPI).

In a statement on Wednesday, EU diplomatic chief Federica Mogherini, enlargement commissioner Johannes Hahn and migration commissioner Dimitris Avramopoulos said those responsible for the attack “should be held to account”.

“Our position on Libya’s system of detaining migrants is clear: this system has to end and migration needs to be managed in full compliance with international standards, including when it comes to human rights.”

Since the UNHCR began evacuating people in need of international protection from Libya in late 2017, fewer than 4,000 have departed, mostly to Niger. Some 710 were resettled in Italy and 269 to an emergency transit centre in Romania.

Earlier this week, the Italian parliament renewed its funding commitment for the EU-funded mission that aids the work of the Libyan coastguard, in a move that began under Italy’s previous centre-left government in 2017.

Last week, the International Organization for Migration (IOM) said that 27,834 migrants and refugees had entered Europe by sea this year through May 1, roughly a 35 per cent drop from the 42,274 arriving during the same period in 2018.

According to the IOM, 597 people have died this year in the three main Mediterranean Sea routes, or about half the 1,189 deaths confirmed during the same period in 2018.

“The Mediterranean has basically been a desert in the past few months,” said Veronica Alfonsi, the coordinator of the Italian office of the Spanish NGO Proactiva Open Arms.

“We’re at sea knowing all too well that this is not a solution,” she added. “What’s missing is the EU and European states assuming responsibility.”