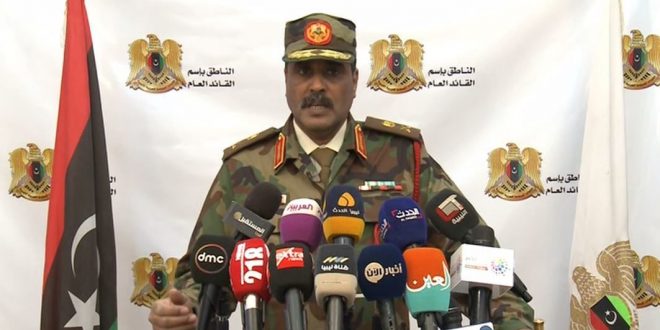 The spokesperson of Haftar forces, Ahmed Al-Mismari, has threatened to target buildings in Tripoli which have rooftop antennas with airstrikes, saying those buildings are legitimate targets for their air force.

“I am sure that there are drone antennas installed on rooftops of government buildings and hotels in Tripoli, today we put this matter on this table, but tomorrow we might hit them with a rocket,” he threatened at a press conference on Sunday.

Al-Mismari, also known as Haftar’s minister of propaganda, demanded an urgent uninstallation of all antennas from Tripoli buildings or they will become legitimate targets.

His threats are seen as an attempt to justify air raids on non-military targets such as Tajoura Detention Center of migrants and other civilian buildings.

Commenting about Tripoli fighting, he said their forces control 95% of Libyan soil and that the zero hour for Tripoli control is drawing nearer.

Al-Mismari claimed that ISIS has become weak and started disappearing from Libya, a day after the terrorist group appeared in a new propaganda video in the southern region where Haftar’s forces claim full control.