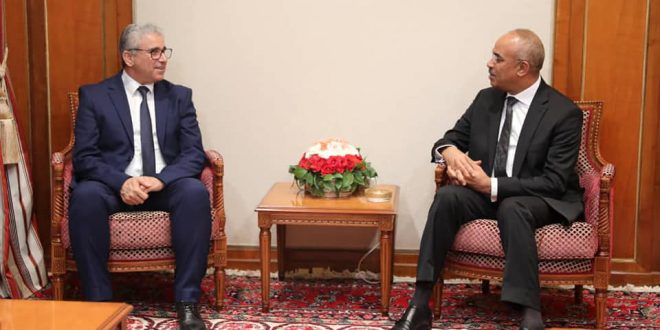 Prime Minister of Algeria, Noureddine Badawi expressed during his meeting with the Libyan Interior Minister, Fathi Bashagha in Algeria his country’s desire to contribute to the success of the Libyan dialogue.

The Algerian prime minister said that Haftar is nothing compared to Libya’s great role in the regional and international community, according to the Libyan Interior Ministry.

“There is disenchantment among African leaders on the current situation in Libya,” the Algerian Prime Minister said, ” The AU must have a greater role in the stability of Libya,” he added.

Badawi also pointed to the possibility of opening airspace between Algeria and Libya in the near future, praising efforts of the Interior Minister, Fathi Bashagha to establish peace and security in the country, according to the Information Office of the Libyan Interior Ministry.

Bashagha met yesterday – during his visit to Algeria – Algerian Interior Minister, Salah Eddin Dahmon, where the later emphasised his country’s commitment to support the Libyan people in all circumstances, to achieve a political solution to the crisis.

He further stressed the need for security coordination in order to protect borders, fight drugs, and to preserve the unity of Libya, explaining that Algeria is ready to cooperate in the field of training, with the Government of National Accord (GNA), which his government only recognizes.

On the Libyan side, Bashaga said that developments in the region require the activation of security cooperation between Algeria and Libya, in order to counter the threat of terrorism, organized crime, and drug trafficking, underlining that activating previous agreements in addition to developing new ones, will be a priority to the GNA.

International Relations and CooperationSecurity ForcesSecurity Situation
All
2019-07-09
asaeid
Previous NYT: US missiles found with Haftar’s forces in Libya were sold to France in 2010
Next Libya rights groups call for immediate evacuation of refugee centre