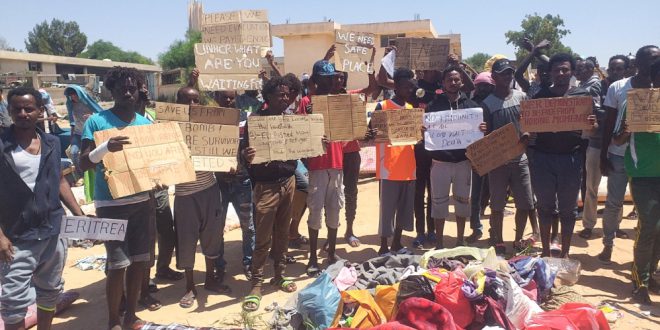 Seven days after Haftar’s bombing of the migrant detention centre in Tajoura, killing 53 people, several migrants exited the facility and began a protest against the delay in their deportations.

The migrants’ departure followed a visit to the camp by the United Nations Refugee Agency’s, last Tuesday, and the selection of 70 migrants to return to their countries. The remaining 400 migrants began a protest against the delay in their deportation.

The Ministry of the Interior of the Government of National Accord (GNA) expressed its regret over the migrants’ departure from the centre without completing the required legal procedures.

Fathi Pashagha, the Minister of the Interior for the NGA, told Libya Al Ahrar channel that the security services charge of protecting the centre were told not to engage with migrants or prevent them from leaving by force. Thus they permitted several migrants to protest without being harmed in the capital’s streets.

The Office of the United Nations High Commissioner for Refugees (UNHCR) welcomed the release of the migrants in Tajoura and urged European countries to pay more attention to migrants in Libya.

The UNHCR also called on European governments to make use of their political connections with Libya to improve the situation of migrants.

The UN agency’s claim came after Pashagha had said: “The government will consider closing the migrant detention centres and releasing migrants if Haftar forces’ attack on centres continues.

Pashagha said that necessary measures are to be taken to save lives and ensure the migrants’ safety, especially if the migrants’ countries do not cooperate with Libya and Haftar forces persisted in shelling the migrant detention centres.

These statements came after Haftar’s forces targeted the migrant detention centres in Qasr bin Ghashir and Tajoura as part of its assault on Tripoli. The attack on migrants in Libya sparked a wave of local and international condemnations.