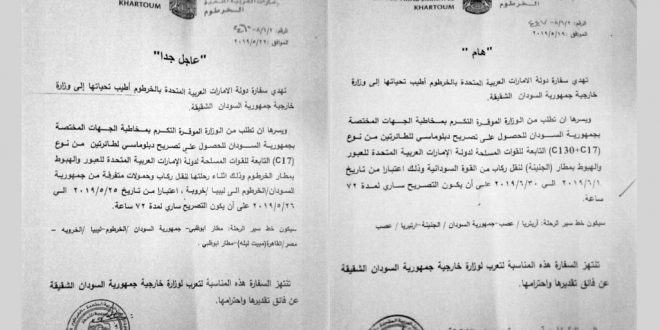 Al-Jazeera Channel unveils UAE’s use of African mercenaries to fight in Libya, Yemen

Al-Jazeera Channel said it had obtained documents that prove Sudan used its airspace to transport hundreds of mercenaries, recruited by Mohammed Hamdan Delgo (Hemitti) – deputy head of military council in Sudan -, from the Arab tribes in Darfur as well as neighboring African countries to Libya, Yemen and Eritrea.

Documents revealed by Al-Jazeera showed the UAE using the airspace of Sudan for C130 and G17 planes and landing in Jenina Airport in west of the country, saying in the documents that the passengers would be from Sudanese armed forces to carry out a mission from June 01 to June 30, 2019.

In another document, the UAE’s embassy asked Sudanese authorities for a diplomatic pass for C17 aircraft to land in Khartoum airport to transport passengers and other stuff to Kharouba in Libya, saying the aircraft’s line would be Abu Dhabi – Khartoum – Kharouba (Libya) – then back to Abu Dhabi via Egypt.

The documents show that the deputy head of the Sudanese military council had recruited about 450 mercenaries for the UAE army from Arab tribes in Darfur.

“The mercenaries were chosen to be of fair skin and speak Arabic. They were gathered in Sudan then transported from Jinina in southern Sudan to receive military training by the American Blackwater.” The documents revealed.

The UAE is planning to give its citizenship to the Arab Darfur recruits in order to use them in its army for overseas combat, such as in Yemen, the documents say.