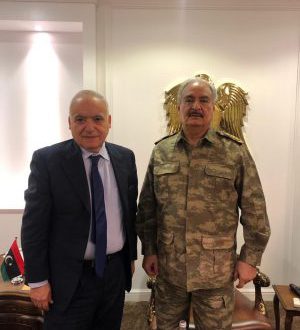 Salame warns Hafter of consequences of escalation and foreign interference

UNSMIL reports that they “discussed the latest developments in Libya and ways to return to a state of peace and dialogue.”

It also reported that Salame “warned against the consequences of the escalation of fighting and the increasing foreign interference” in Libya.

It will be recalled that Khalifa Hafter and his LNA launched a military attack on Tripoli on 4 April in order to “liberate it from terrorists, Islamists and militias”.

Hafter’s military campaign has so far failed to take Tripoli.

The Hafter forces are widely perceived to be supported by Egypt, the UAE and Saudi Arabia.

The forces defending Tripoli, aligned to the internationally recognized Libyan Presidency Council and Government of National Accord led by Faiez Serraj, are perceived to be supported by Turkey and Qatar.