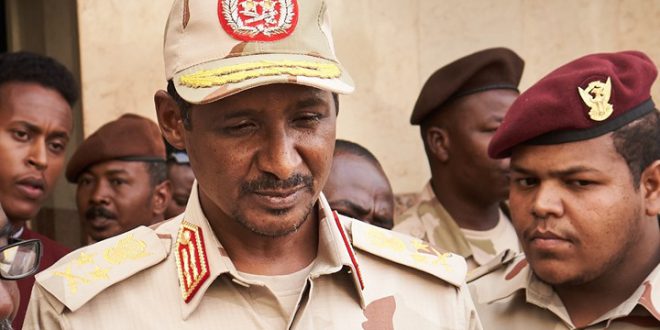 Their arrival, which was reported by Radio Dabanga, a Dutch-based broadcaster run by Sudanese exiles, coincided with Haftar’s declaration of an imminent “victory” as his forces amass on the outskirts of the Libyan capital.

According to Radio Dabanga, the RSF members will be deployed to protect oil facilities in Haftar-controlled eastern Libya in order to allow him to concentrate his fighters for an assault on Tripoli. It said the number of RSF fighters in Libya could rise to 4,000 in the next few months.

The RSF is a paramilitary force led by Mohammed Hamdan Dagolo, the deputy head of Sudan’s ruling military council commonly known as Hemeti, and has played a leading role, according to opposition activists, in a deadly crackdown on protesters in Sudan since the beginning of June.

The movement of fighters has confirmed the fears of those Sudanese protesters about becoming entangled in more regional conflicts since the prospect of RSF fighters – who have already been deployed to Yemen as part of the Saudi-led coalition – going to Libya was first floated in a lobbying deal made public in June.

According to documents signed by Hemeti on behalf of the military council in May, and recently published in public listings in the US, the transfer of troops to support the LNA in Libya was proposed as part of a $6m deal between Sudan’s military rulers and Dickens and Madson, a Canadian lobbying firm which also has links to Haftar and a record of past dealings in Libya.

The other signatory to the deal was Ari Ben-Menashe, the founder of Dickens and Madson and a Tehran-born former Israeli intelligence officer whose eventful career has included being arrested and put on trial in the US in 1989 for allegedly trying to sell weapons to Iran.

He was acquitted after a New York jury accepted that he had been acting on orders from Israel, according to a profile of Ben-Menashe in Canada’s National Post.

Among other lobbying activities, the deal said that Dickens and Madson would “strive to obtain funding for your [Sudan’s] Council from the Eastern Libyan Military Command in exchange for your military help to the LNA”.

When contacted by Middle East Eye this week, Ben-Menashe said that the “exchange” proposed in the agreement had yet to take place and described it as a possibility only once a civilian prime minister was installed in Sudan.

But the agreement, disclosed under the US Foreign Agents Registration Act (FARA), which requires organisations representing the interests of foreign powers to declare these ties publicly, fits a pattern of dealings involving Libya and Ben-Menashe’s lobbying firm.

Other documents available through the online FARA registry show that since the end of Muammar Gaddafi’s three-decade rule in 2011, Ben-Menashe’s organisation has provided public relations and lobbying services to several Libyan groups, including Haftar’s LNA.

The latest agreement with Sudan is Dickens and Madson’s fourth deal linked to Libya, where the organisation has had a particular focus on the eastern part of the country.

Dickens and Madson has offered clients services that range from polishing their image and forging diplomatic links to facilitating oil sales and bringing in hundreds of millions of dollars in military assistance – in a turbulent Libyan context some observers have called a “Wild West” for lobbying firms.

Since Gaddafi was killed in October 2011, eight months into an uprising against his autocratic rule, Libya has been torn apart by competing claims to leadership between numerous factions.

The two most prominent bodies claiming power have been the UN-recognised Government of National Accord (GNA), based in Tripoli, and Haftar’s LNA forces and accompanying House of Representatives government.

Haftar became a client of Dickens and Madson in 2015, according to a FARA filing which lists him and others including the House of Representatives as the “foreign principal” for a $6m deal in which the Canadian firm promised to lobby for recognition and favour in the US and Russia, but also vowed to “strive … to obtain” $500m in military assistance from Moscow.

The goal, the document said, was to get international governments to recognise and help the House of Representatives in its purported goal to “restore peace and order to the Republic of Libya”.

Ben-Menashe told MEE that he had not officially represented the House of Representatives since their deal expired earlier this year. He said he did not try to renew it after Haftar’s assault on Tripoli began, which he claimed he had tried to prevent.

But he said he remained in contact with Haftar, and had tried to broker a meeting for him with Fayez al-Sarraj, the prime minister of the GNA in Tripoli, whom he said he had met in Tunisia and Malta.

“In spite of the fact that we didn’t have this contract [with Haftar anymore] we were requested to help as we know all the sides of the conflict,” Ben-Menashe said. “The issue of uniting the two sides had been part of our work for three or four years.”

‘There has to be a unifying force’

Haftar, who has been backed by the United Arab Emirates, Egypt and Russia, has controlled the dominant military force in eastern Libya since launching a campaign against Islamist militant groups around Benghazi in 2014.

But his forces have been accused of human rights abuses and war crimes. Last month, Haftar promoted a commander who is the subject of an International Criminal Court arrest warrant over the alleged execution-style killing of prisoners in 2016 and 2017.

In May, Amnesty International accused the LNA of possible war crimes for bombarding civilian neighbourhoods in Tripoli.

Speaking to the BBC in July, Ben-Menashe credited Haftar and the House of Representatives with bringing stability to eastern Libya.

“We’ve represented the House of Representatives, and I think there’s stability in eastern Libya – much more stable than it was before, and we helped bring that about,” he said.

“What Mr Haftar did in Tripoli, that’s a different story. There has to be a unifying force, and Mr Haftar got backing from different governments as well.”

While Haftar has been Dickens and Madson’s most prominent Libyan patron, Ben-Menashe has also continued to represent another Libyan client – the Unified Libya Movement (ULM) – about which there is limited public information.

The ULM is registered under a Tripoli address and stated in FARA filings that it was “supervised by Libya’s GNC [General National Congress] government”. Created in 2012, the GNC was Libya’s transitional legislative authority for two years, before officially dissolving in 2016.

In a 2014 deal previously reported on by MEE, Ben-Menashe’s firm promised to deliver aid, financing and political support to the ULM to help “establish a stable social and political environment for building an inclusive, independent national government for a prosperous sovereign and unitary Libya”.

Speaking to MEE at the time, Ben-Menashe said that his clients were not all necessarily aligned with the GNC.

“Our clients are a group of people [Libyans] who want to bring everybody [from the GNC and House of Representatives] together and start a new legislative body,” he said. “Some [of the clients] are people who were in the GNC and some are still in the GNC.”

In the FARA filing after the deal with the ULM was struck, Dickens and Madson said it could not name the individuals they were representing because it “may place them at physical risk”.

Working for the US government

In a 2017 report filed with FARA on the firm’s activity for foreign interests – which at the time consisted of only two Libyan clients, Haftar and the ULM – Dickens and Madson said it had meetings outside the US with individuals “who might in turn have some influence with respect to the position of the United States regarding the establishment of governing structures in Libya”.

The firm also said in the report that it had been working on behalf of the US government.

Neither Haftar nor the ULM were Ben-Menashe’s first clients in Libya.

In 2013, he agreed a $2m deal with the eastern Libya-based Cyrenaica Transitional Council (CTC) and an allied militia leader, Ibrahim Jathran, shortly after they had taken control of eastern Libya’s oil export ports, which they held until they were driven out by Haftar three years later.

The CTC had announced the creation of its own federal government that same year, and Ben-Menashe’s firm promised to seek recognition for its authority.

The deal said Dickens and Madson would work towards obtaining $75m in military aid from Russia and help find sellers and transport for the plentiful oil supplies in eastern Libya, despite opposition from the GNC in Tripoli.

But that deal quickly fell apart, and in October 2014 Dickens and Madson reported to FARA that no work had been done for the client and no money received.

A month later, Ben-Menashe’s firm began its work with the ULM. The following year, Dickens and Madson also started working with Haftar, who by then was at war with Jathran, his first client.

‘We really thought we could help’

Ben-Menashe told MEE that he had made at least 20 trips to Libya over the course of his work there for Dickens and Madson and reiterated that the company had helped to stabilise the east of the country.

Under former US president Barack Obama, Ben-Menashe said, he had advocated for the eastern government to run Libya instead of the UN-backed Sarraj, who he had viewed as a bad choice.

While he said he no longer worked with Haftar, whom he described as “impatient,” Ben-Menashe said he remained active in Libya, and was also working with the Gaddafi clan and the minority Amazigh community to build a consensus for a unified Libya.

Dickens and Madson is just one among several Western lobbying firms that have identified business opportunities in the continuing instability in Libya since the 2011 revolution, according to experts.

“As we say here: there’s gold on those hills. There’s money to be made in eastern Libya for those who take the risk.

“Just as someone’s willing to sell weapons, someone’s going to be willing to do the PR. There are a lot of bottom-feeders out there.”

Ahmed Gatnash, a co-founder of the Kawaakibi Foundation, which works to promote liberal values in the Arab and Muslim world, said the trend for Middle Eastern powers to hire lobbyists, even beyond Libya, might not do much to increase their standing with the US or other foreign powers but could indirectly impact the public’s view of diplomacy.

“They kind of show the populace that their politicians are potentially buyable,” he said.

“Even if the lobbying firms don’t do something, it fuels a kind of despair that the world is for sale, democracies are easily corruptible. Why would anyone back democracy in Libya when it can easily be bought?”

More than a dozen parties and factions in Libya have struck deals with US-based lobbying firms since 2011, according to FARA documents. Most of them have focused on strengthening relations between the client and the US government, or polishing their public image.

Both Haftar and the UN-backed GNA have signed new lobbying deals even since the LNA assault on Tripoli began. Donald Trump spoke to Haftar in a telephone call in April, in which a White House spokesperson said the US president had recognised Haftar’s “significant role in fighting terrorism and securing Libya’s oil resources”.

In May, Haftar’s LNA signed a deal with Houston-based Linden Government Solutions for “assisting in relations between the US government and Client, international coalition building, and general public relations”. 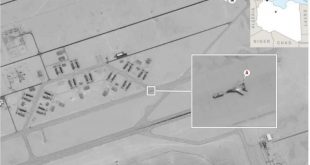