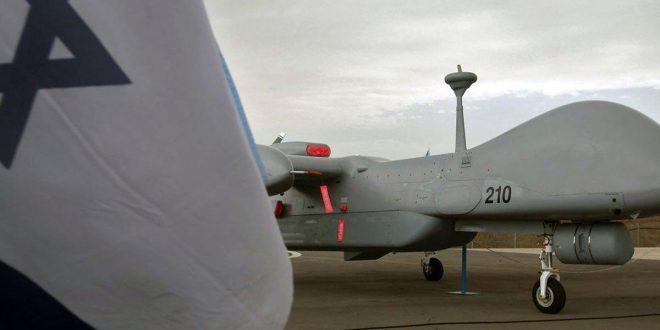 The two drones – Orbiter-3 tactical drones made by Israeli company Aeronautics – were shot down in Libya last week but only reported yesterday by the Jerusalem Post.

One of the drones was recovered from Al-Aziziya, some 40 kilometres southwest of Libyan capital Tripoli, while the other was recovered in Sidra, east of Sirte on the country’s coast.

The Israeli daily explained that, “according to reports, the two drones were part of a three-unit donation by Turkey to the United Nation-recognized Government of National Accord (GNA) which is fighting to prevent Tripoli from being taken by [General Khalifa] Haftar’s LNA [Libyan National Army]”.

In May, forces allied with the GNA claimed to have received a shipment of arms and military vehicles which would form part of their efforts to defend Tripoli from an onslaught by Haftar’s forces, which has been ongoing since April.

Pictures and videos posted by GNA forces on their Facebook pages at the time showed what appeared to be dozens of Turkish-made BMC Kirpi armoured vehicles in the capital’s port. The Turkish embassy in Libya did not comment on the images.

The Jerusalem Post’s report also included a tweet from Mohamed Mansour, a freelance journalist with Al-Mayadeen, with a video in which the nose of the downed drone can be seen. Mansour explained: “I am surprised that no one ever highlighted the presence of Israeli/Azerbaijan-made Orbiter-3 UASs which was supplied to #GNA by #Turkey and two of them [were] downed by #LNA so far! This video is for the second downed one in #Khelat_AlFergan Southern #Tripoli.”

Until now i am surprised that no one ever highlighted the presence of Israeli/Azerbaijan-made Orbiter-3 UASs which was supplied to #GNA by #Turkey and two of them was downed by #LNA so far! this video is for the second downed one in #Khelat_AlFergan Southern #Tripoli. pic.twitter.com/2EAHLRLztR

Israel has long sold arms to Azerbaijan, with Israeli arms manufacturer Elbit Systems in January selling “kamikaze” drones to the Caucasian country in the first deal of its kind. During a visit to Azerbaijan by Israeli Prime Minister Benjamin Netanyahu in December 2016, Azerbaijani President Ilham Aliyev revealed that “so far the contracts between Azerbaijani and Israeli companies with respect to purchasing defence equipment have been close to $5 billion”.

Aeronautics has denied any knowledge of the incident in Libya. Meanwhile Yossi Melman, an intelligence commentator for Israeli newspaper Maariv, yesterday tweeted that Aeronautics officials told him they have not sold their products to Libya and that Azerbaijan may have been responsible for transferring the drones.

It is not yet clear to whom Aeronautics first sold the drones, which were seemingly then transferred to Libya. However, given that the UN Security Council has repeatedly renewed an arms embargo on Libya since the start of the civil war in 2011, Aeronautics could find itself in violation of international law for having provided arms to GNA forces.

This is not the first time reports about Israel’s involvement in the Libyan civil war have surfaced.

In the summer of 2015, Israel was reportedly sending direct military aid to Haftar forces, allegedly carrying out air strikes on Sirte in a bid to oust Daesh – which had overrun the city in February of that year – from the region.

In 2018, reports emerged that Haftar had an “extended meeting” with an Israeli intelligence officer in Jordanian capital Amman, in a bid to “deepen security coordination between him and Israel”. An unnamed source close to Haftar explained that the general “asked that the Israeli security forces intensify their presence in southern Libya to cut off French and Italian desire to control the region”.

Haftar was allegedly able to contact Israel through former Israeli spy Ari Ben-Menashe, who is infamous for his lobbying work and contact with controversial leaders, including Lieutenant General Mohamed Hamdan Dagalo – often known as Hemeti – who currently heads Sudan’s Rapid Support Forces (RSF) and is working closely with the country’s Transitional Military Council.

Israel joins Haftar’s other regional backers, including the United Arab Emirates (UAE), Egypt, Saudi Arabia, Russia and France, who have provided material and financial support for the general.

For its part, the GNA has reached out to Turkey – itself engaged in regional tensions with the above parties – for support. If the Israeli drones were found to be used by the GNA as opposed to forces loyal to Haftar, this could represent a new Israeli front in the country’s protracted civil war.