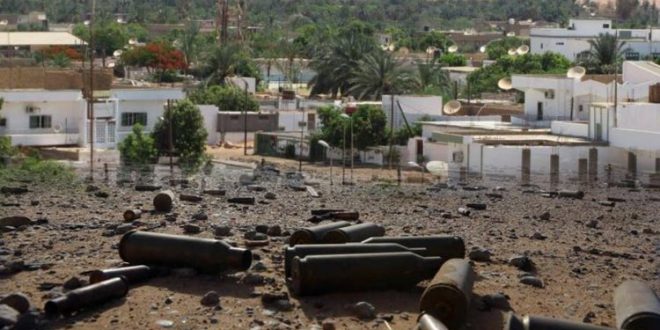 The commander of South Protection Force of the Government of National Accord (GNA) Hassan Mousa told reporters on Sunday that the force had seized full control of Murzuq in southern Libya after pushing out Khalifa Haftar’s forces following two weeks of fatal clashes between Al-Ahali tribespeople backed by Haftar and Tubu tribespeople.

The South Protection Force started after its control to secure the town’s entries and the people who have been subject to many attacks by Haftar-backed militias.

Meanwhile, a Tubu tribal source said that on Saturday, Haftar’s warplanes struck different areas in Murzuq leaving behind several people killed and wounded from both sides of the clashes.

Clashes have been ongoing since Haftar’s forces entered Murzuq in last February as they fueled the tribal and ethnic tensions between Arab and Tubu tribespeople living in the town.