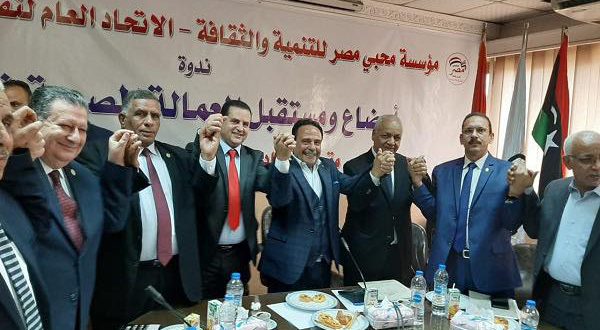 The Foreign Minister of the Libyan Interim Government in eastern region, Abdelhadi Al-Huwaij, has called for prioritizing Egyptian firms and workforce in rebuilding projects in the country’s “liberated areas.”

The Foreign Minister’s remarks came in a forum organized by the Egyptian Workers’ Union in Cairo under the slogan ” Egyptian workers’ conditions and future in Libya.”

He also called for executing the four agreements with Egypt; the freedom of work, transportation, ownership, and finances’ transfers between Libya and Egypt.

“It’s a shame that the Egyptian workers are not the ones recruited the most in Libya for reconstruction projects. Egyptians entered Libya legally and have no diseases. Their statuses are approved by Interim Government authorities.” Al-Huwaij added.

He also said that Libyans are now living in security and if there have been any violations, then they would be similar to all countries around the world.

“Bringing workers to Libya should go through the Workers’ Union in Egypt so illegal routes through Sudan and Tunisia can be spared.” He explained.

Budget and FinanceInternational Relations and Cooperation
All
2019-08-29
asaeid
Previous Libyan army exchange bodies of soldiers with the opposite party under Red Crescent supervision
Next Turkey stands with legitimacy in Libya, Işler says