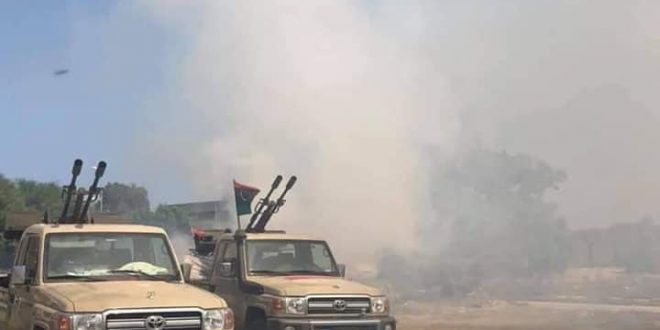 A woman and her child were killed Wednesday night after Khalifa Haftar’s forces had shelled their residential neighborhood on Wali Al-Ahed street on Tripoli Airport Road. Eight others were injured.

The spokesman for the Ambulance Apparatus of the Health Ministry Osama Ali said a random shell fell on the woman’s house on Wali Al-Ahed street and killed her along with her baby girl – who was picked from under the rubble.

Ali told reporters that a warning for all residents of Sidi Salim and Al-Hadab was made by the apparatus so they can remain in downstairs floors and away from windows amid the constant shelling of Haftar’s forces.

The residents of Sidi Salim and Wali Al-Ahed confirmed that several rockets hit their neighborhoods and some were left unexploded.

Haftar’s forces carried Wednesday overnight attacks covered by heavy airpower – foreign backers – on Tripoli frontlines. The clashes lingered through Thursday as the Libyan Army under the command of the Presidential Council’s government managed to foil their attacks inflicting on them a heavy death toll and loss of military equipment.