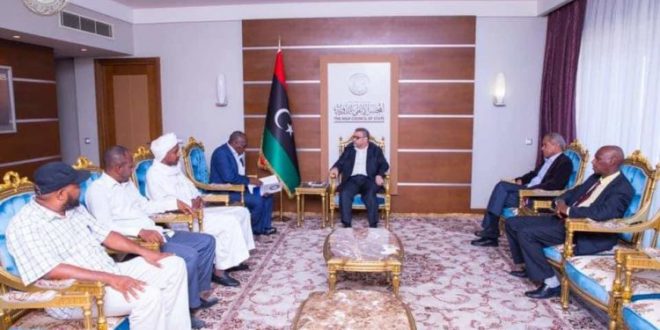 The Head of the Libyan High Council of State (HCS) Khalid Al-Mishri met Sunday with a delegation from Tubu tribe in southern Libyan city of Murzuq.

The meeting in Tripoli discussed efforts to reshuffle the municipality of Murzuq in order to task the members to be a steering administration.

The discussion also included hardships and challenges faced by the municipality of Murzuq as well as the conditions of the displaced people and ways to allow them back in their homes.

The meeting was attended by the first deputy head of he HCS, Mohammed Baqi, the HCS member Al-Taher Al-Makni and the Tubu delegation was headed by the Head of Steering Council of Murzuq Ali Wardabo and several elders and dignitaries.