A video circulated on social media platforms showed so-called security forces of Haftar opening fire on a peaceful protest organized by teachers in front of the ministry of education of the east-based parallel government.

Teachers gathered in front of the ministry in response to calls made by colleagues in other cities for an open sit-in to demand improvement of living conditions and an increase in salaries.

The incident caused indignation among social media users and even among those who reject the sit-in that coincided with the start of the new school year. 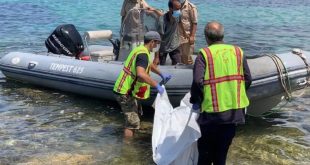