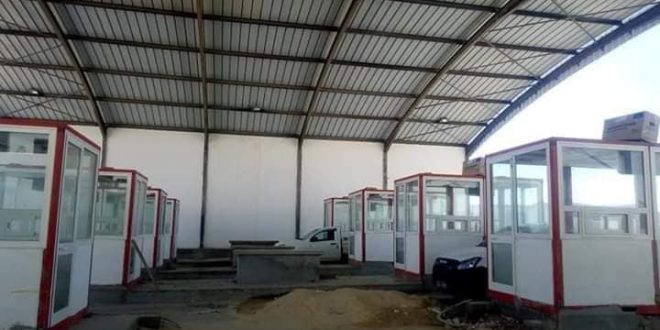 Photographs of the latest stages in the redevelopment of Libya’s Wazen land border crossing with Tunisia emerged this week.

The redevelopment is part of a wider programme to improve the very poor standard of infrastructure and services offered at Libya’s land border crossings.

The new-look border crossing has been more than two years in redevelopment and is expected to be triple its original size. There are six passport processing windows in and out of Libya and a large hanger for customs inspections which also has its own 6 processing windows.

The old single lane road has been expanded into a very wide dual carriageway with a separate lane for goods vehicles and a lane for VIP’s on official duties and ambulances.

It will be recalled that the matter of the redevelopment of the Wazen border crossing was the subject of discussion earlier this month between the Transport Ministry and the Municipality of Nalut, within which the border crossing is located.

It must also be recalled that the Tripoli government had recently made a decision to establish a centre for the management and operation of all of Libya’s land border crossings. This new body will be in charge of all matters related to land border crossings akin to the role played by the Airports and Seaports authorities.