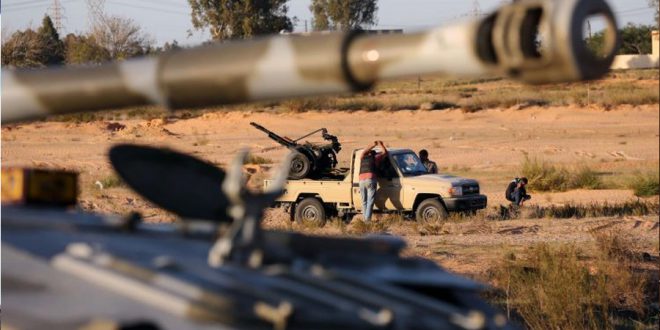 Warring parties in the ongoing battle for Tripoli have killed and maimed scores of civilians by launching indiscriminate attacks and using a range of inaccurate explosive weapons in populated urban areas, Amnesty International said in a new report published today.

In the first in-depth field investigation across the frontline since fighting broke out on 4 April, the organization visited 33 air and ground strike sites in Tripoli and surrounding areas. It unearthed evidence of potential war crimes by both the UN-backed Government of National Accord (GNA) and the self-proclaimed Libyan National Army (LNA), who have been fighting in and around the city.

“Our on-the-ground investigation on both sides of the frontline revealed a systematic disregard for international law fuelled by the continued supply of weapons to both sides in violation of a UN arms embargo,” said Donatella Rovera, Senior Crisis Response Adviser at Amnesty International.

“Scores of civilians have been killed and injured as both sides use everything from Gaddafi-era unguided rockets to modern drone-launched guided missiles in attacks that could amount to war crimes,” said Brian Castner, Amnesty International’s Senior Crisis Adviser on Arms and Military Operations.

The report said that Amnesty International investigators were on the ground in Libya from 1 to 14 August, and visited both sides of the conflict in and around Tripoli, Tajoura, Ain Zara, Qasr Bin Ghashir and Tarhouna. They interviewed 156 residents, including survivors, witnesses and relatives of victims, as well as local officials, medical workers and members of militias.

It added that Amnesty International experts in remote sensing, weapons and ordnance, photographic and video verification, and members of its Digital Verification Corps also carried out an open source investigation into many of the strikes.

Tellingly, it also reported that GNA and LNA officials have not responded to questions Amnesty International sent about their strikes.

The report said that according to UN statistics, the fighting over the last six months has killed and wounded more than 100 civilians – including dozens of detained migrants and refugees – and has displaced more than 100,000. Air strikes, artillery barrages and shelling have struck civilian homes and other key infrastructure, including several field hospitals, a school, and a migrant detention centre, and have forced the closure of the Mitiga airport, Tripoli’s sole international air link.

It revealed that some of the attacks documented by Amnesty International were either indiscriminate or disproportionate – meaning they violated fundamental principles of international humanitarian law and could amount to war crimes. In other cases, the presence of fighters at or near civilian homes and medical facilities endangered civilians there.

Children as young as two years old playing outside their homes, mourners attending a funeral, and ordinary people going about their daily activities were among those unlawfully killed or injured, the report added.

“What kind of war is this, killing civilians, families, in their homes? What can we do? May God help us,” one woman told Amnesty International. Her husband, a 56-year-old father of six, was killed when a rocket struck his own bedroom where he was resting after returning home from playing football.

This was reportedly part of an indiscriminate attack launched by the LNA on the Abu Salim neighbourhood just before 11pm on 16 April, 2019. The salvo of six notoriously inaccurate ground-launched “Grad” rockets rained down over several city blocks, killing eight civilians, injuring at least four more, and leaving the survivors badly traumatized

The report also revealed that a GNA artillery attack on the densely populated civilian neighbourhood of Qasr bin Ghashir at around 12.15pm on 14 May, 2019, hit a three-storey building, killing at least five civilians and injuring more than a dozen. Many people were moving about the area at the time to attend the funeral of a well-known neighbour.

“I was at home and my brother was standing outside on the street. The strike was massive; it sent a vehicle flying on top of another vehicle and for a moment everything was black. I rushed outside and there were many neighbours dead and injured on the ground; there were severed body parts. It was a shocking sight. Then we found my brother; he had injuries everywhere; he died. I couldn’t believe it,” the brother of 19-year-old Ahmad Fathi al-Muzughi, who died in the strike, told Amnesty International.

GNA air strikes in Qasr Bin Ghashir and Tarhouna have also hit civilian homes and infrastructure, utilizing FAB-500ShL unguided “parachute” bombs. With a blast radius of over 800m, this weapon is completely inappropriate for use in urban areas, the Amnesty International report said.

The report said that Mitiga Airport – for months Tripoli’s only functioning airport – is now closed after being repeatedly targeted by LNA attacks. Nearby civilian homes and a school have also been struck in what appear to be indiscriminate attacks. Amnesty International experts examined craters and munitions fragments at several of these strike sites, pointing to the use of unguided, large explosive weapons.

LNA attacks have also damaged or destroyed several ambulances and field hospitals used to treat wounded fighters. Medical workers and facilities – including those treating sick or wounded fighters – have special protection under international humanitarian law and should not be targeted. Amnesty International has found that GNA fighters have used field hospitals and medical facilities for military purposes, thereby rendering them vulnerable to attacks, the report added.

The deadliest such attack, the report said, was a missile strike on a field hospital near the closed Tripoli International Airport on 27 July 2019 that killed five medics and rescuers and injured eight more. Based on Blue Arrow 7 munition fragments found at the site and other evidence, Amnesty International determined that the strike was launched from a Chinese Wing Loong drone – which the United Arab Emirates (UAE) has been operating on behalf of the LNA. The organization also established that the facility was not marked as a medical facility and had also been used by fighters for eating and other purposes.

The report noted that despite a comprehensive UN arms embargo in place since 2011, the UAE and Turkey have been supporting the LNA and GNA, respectively, through illicit arms transfers and direct military support.

“The international community must uphold the UN arms embargo, which Turkey, the UAE, Jordan and other countries have flagrantly violated,” said Brian Castner, Amnesty International’s Senior Crisis Adviser on Arms and Military Operations

“All sides must take immediate and concrete steps to protect civilians in line with the laws of war and investigate the conduct of their forces. A Commission of Inquiry should be put in place to pave the way for justice and reparation for the victims and their families,” said Donatella Rovera.

“Members of the UN Human Rights Council should work together to establish this mechanism as a matter of urgency, which could determine responsibility for violations and preserve evidence of crimes.”